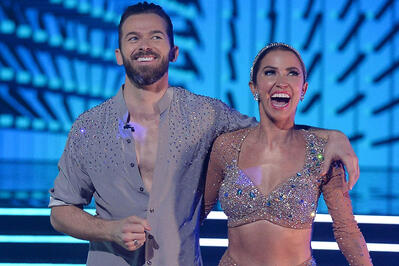 For the Dancing with the Stars Season 29 semifinals, it’s a double elimination week. Host Tyra Banks kicked things off by strutting her way into the ballroom to “Gasolina” by Daddy Yankee looking like if Elvira, Mistress of the Dark was attending the Kentucky Derby. But that’s OK because redemption dances are up first, which is a dance each contestant struggled with earlier in the competition. After the redemption dances, each dancer will tackle a new style.

Skai Jackson and Alan Bersten
Dance/Song: Cha Cha / “Move Your Feet” by Junior Senior
How They Did: This is markedly better than she did earlier in the season, though I don’t love the music choice. But the important part is that Skai doesn’t miss a step and she looks like she’s having fun, which is something she doesn’t always convey each week. Really well done.
Score: 27/30 (up from 18/30 last time)

Justina Machado and Sasha Farber
Dance/Song: Tango / “El Tango de Roxanne” from Moulin Rouge
How They Did: Justina might be the most improved dancer of the bunch. She certainly manages not to be “hoppy” on her tango this time, though one could argue that a 26/30 the first time isn’t a “redemption” dance. It still feels like she could be sharper with her movements, but the judges loved it. The music choice was dynamite, but it ended in a really weird place.
Score: 28/30 (up from 26/30 last time)

Johnny Weir and Britt Stewart
Dance/Song: Salsa / “X” by the Jonas Brothers
How They Did: This is very good, but it feels more like a showcase for Britt’s flashy dancing than Johnny’s improvement. It is much more controlled than the last time, but it also gets a little messy in the middle. This should be an improved score, but this could have been better. But then the judges give them a 27, which doesn’t seem right. That’s the same score Skai got on her cha cha and her dance was quite a bit stronger than this one.
Score: 27/30 (up from 22/30 last time)

Nelly and Daniella Karagach
Dance/Song: Paso Doble / “Run Boy Run” by Woodkid
How They Did: It feels like as the season goes on, Nelly takes this more seriously every week and he clearly gives 110 percent here. He’s not ever going to a dancer on the same level as some of the others still left in the competition, but he has improved so much and he’s trying really hard. Nelly also really listened to Bruno Tonioli’s advice.
Score: 26/30 (up from 21/30 last time)

Nev Schulman and Jenna Johnson
Dance/Song: Foxtrot / “Sign of the Times” by Harry Styles
How They Did: Nev was already starting from such a strong place that he absorbs Derek Hough’s notes and absolutely nails this foxtrot. He really is the competitor to beat at this point. The lines are so long and lovely, the frame is strong and they just float across the floor. Incredible.
Score: 30/30 (up from 20/30 last time)

Kaitlyn Bristowe and Artem Chigvintsev
Dance/Song: Paso Doble / “Hanuman” by Rodrigo Y Gabriela
How They Did: I’ll be honest, I thought Kaitlyn’s week 7 paso doble was actually quite strong. That was a week I thought Carrie Ann Inaba was being unduly harsh — she gave it a 7 and Derek gave it a 9. That’s some disparity. Anyway, this time around, Kaitlyn manages to win over each judge, even Carrie Ann. This performance definitely feels more serious because it wasn’t part of the villains Halloween theme.
Score: 30/30 (up from 24/30 last time)

Justina Machado and Sasha Farber
Dance/Song: Contemporary / “Holding Out for a Hero” by Ella Mae Bowen and Bonnie Tyler
How They Did: This is beautiful, though not as heartstopping as some contemporary dances have been in the past. There’s just something missing. Maybe it’s Justina’s huge grin. She’s infectious and it’s great that she’s having so much fun, but this could have maybe been more powerful if it had been more serious and emotional? Hmm. The judges feel completely the opposite, which is fine. I love Justina, so I won’t be mad if she sticks around.
Score: 30/30

Skai Jackson and Alan Bersten
Dance/Song: Viennese Waltz / “Lonely” by Noah Cyrus
How They Did: This is my favorite Skai dance of the entire competition. She is phenomenal here — so emotional, so graceful, floating on air. Her lines, her flexibility, her rise and fall, it’s all great. She’s like a ballerina out there. This totally deserves a perfect score.
Score: 30/30

Johnny Weir and Britt Stewart
Dance/Song: Jazz / “I Lived” by One Republic
How They Did: It’s almost unfair to give a former figure skater jazz or contemporary. This is very good, but of course, it is — it’s practically a figure skating routine. Now, the only question is if voters will respond to it. Johnny got a perfect score last week and was still in the bottom two. But he definitely deserves to go to the finals after his dances tonight.
Score: 30/30

Nev Schulman and Jenna Johnson
Dance/Song: Contemporary / “If the World Was Ending” by JP Saxe and Julia Michaels
How They Did: This is the amount of emotion I wanted from Justina’s contemporary dance. This felt like Nev and Jenna were telling an epic love story, and Nev managed not to let Jenna pull focus with the flashier moves. She’s obviously a professional and sometimes the female pros can be so much stronger than the male amateurs in terms of flash that they dominate the routine, but Nev holds his own here. Derek says he was so caught up that he forgot to judge and yes, it was captivating.
Score: 30/30

Nelly and Daniella Karagach
Dance/Song: Jive / “Jump Jive An’ Wail” by The Brian Setzer Orchestra
How They Did: Oof, this is going to be tough for Nelly. This is a “light on your feet” dance, the tempo is so insanely fast. However, when it starts, he’s actually better than I was expecting. He’s not pro-level or something, but it’s much livelier than I thought it would be. Also, Nelly is grinning from ear to ear and clearly having so much fun, which is great. The judges give him a standing ovation that he totally deserves. I don’t think he’s one of the strongest four dancers left, but after the level of improvement he showed on that jive, it would be hard to be mad if he made the finals. Of course, the judges are so gobsmacked that they give him perfect 10s, but let’s not get carried away, judges.
Score: 30/30

Kaitlyn Bristowe and Artem Chigvintsev
Dance/Song: Contemporary / “Cowboy Take Me Away” by The Chicks
How They Did: This dance is dedicated to Kaitlyn’s friend Lindsay who was killed in a car accident at the age of 18. She loved this song and they played it at her funeral. Geez. Kaitlyn can barely get through the rehearsal for this, but she manages to keep it together through the performance. It is an absolutely beautiful dance.
Score: 30/30

Elimination: The bottom three ends up being Justina, Skai, and Johnny. That is a shame about Skai, she’s a very strong dancer. The lowest vote-getter is Johnny, which is not a huge surprise after last week. So now the judges get to choose between Justina and Skai. Derek and Carrie Ann choose to save Justina, eliminating Skai.