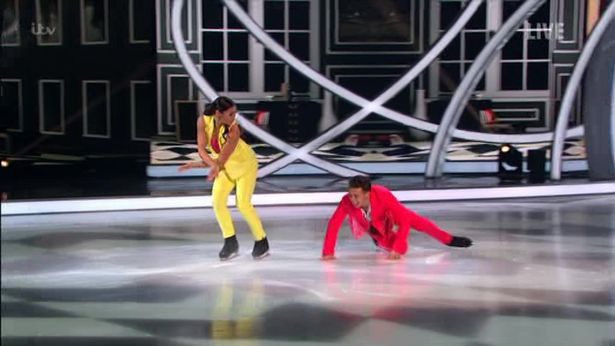 Joe-Warren Plant fell onto the ice as he suffered an unfortunate blunder during his Dancing On Ice debut.

The 18-year-old Emmerdale star laughed off the blunder as he fell over onto the ice and continued to skate.

Afterwards, hosts Phillip Schofield and Holly Willoughby asked what had gone wrong, to which he admitted he didn’t know.

“I couldn’t tell you,” he said. “I thought I was doing everything perfectly and I ended up in the floor.”

Despite the fall, the judges were chuffed with Joe’s on-ice debut.

Ashley Banjo was the first to give his verdict, saying it would have been a performance worthy of a seven if he’d kept his balance.

John Barrowman was up next, gushing that Joe has “such ease on the ice”, while Jayne Torvill chimed in that Joe looked “very relaxed.”

Finally, Christopher Dean told him: “You know what?

“He was smiling well he fell down, and he’s still smiling now. That’s what I loved about that performance.”

Taking a selfie on the way to the ice rink at RAF Bovingdon in Hertfordshire, Holly cosied up in a turquoise puffer jacket and hid her mouth behind a black face mask.

She captioned the Insta Story with a simple “Incoming!” and tagged Dancing On ice.

Phil also gave fans a glimpse at how the new Covid-secure studio looked like ahead of the live show.

Sharing a video of himself and Holly, standing two meters away behind him, he said: “We are finally reunited – well, we’re a long way apart – but we are in the Dancing On Ice studio and we’re all here.”

Showing off the elongated judges panel, which had perspex dividers between Ashley, John, Jayne and Christopher, Phil said: “Here’s the incredibly long judges desks and they are all in their own perspex compartments.”

“It’s the Titanic! The judging Titanic!” John called out.

This year’s skating competition has already been riddled with issues, though surprisingly not to do with Covid-19.

Last night, Denise Van Outen was rushed to hospital after dislocating her shoulder after falling face first during rehearsals.

Professional skater Yebin Mok is also unable to perform alongside her celebrity partner Graham Bell at the launch after a freak accident saw him stab her leg with his skate blade.

*Dancing On Ice airs tonight at 6pm on ITV