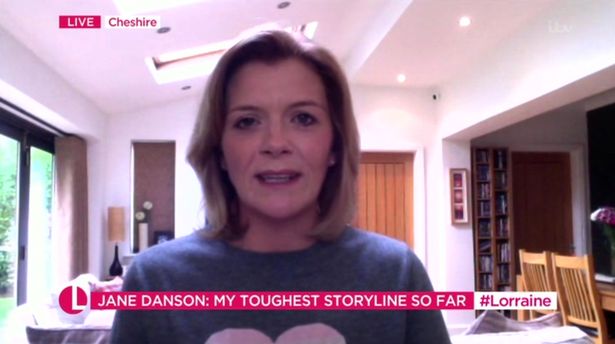 Coronation Street ‘s Jane Danson, who plays Leanne Battersby, appeared on Lorraine on Monday to speak to Lorraine Kelly about her heartbreaking storyline.

Leanne’s son Oliver, three, is battling a mitochondrial condition and there is now a court case over whether his treatment should continue or if it would be kinder to let him die.

“It’s been overwhelming really, we’ve been discussing this storyline for quite some time,” said Jane.

“And even though across the years I have had so many wonderful stories, this has felt like the most important, certainly the most challenging.

“Rather than it bringing the two together, Leanne has done that thing of pushing everyone away and thinking she is the only one who can deal with this and make this better.

“You were saying you were crying sometimes reading the scripts?” asked Lorraine, as Jane nodded.

“It pulls on your heartstrings anyway, but as a parent it feels overwhelming.

“The scripts are so wonderful, it’s hard not to cry, the last few weeks have been really tough, and the next couple weeks on screen are quite full on.

“I think they are possibly the best scripts I will ever have, and I had to put them down several times because because it is truly heartbreaking.”

* Lorraine airs weekdays on ITV at 9am