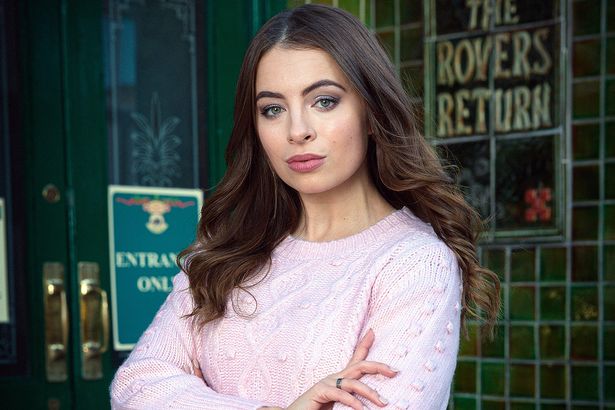 When it comes to being wicked, Tracy Barlow takes some beating, but Corrie ­newcomer Charlotte Jordan has set herself that very challenge in her role as Daisy Midgeley.

The 25-year-old joined the ITV soap last year as Rovers Return landlady Jenny Connor’s manipulative step-daughter and hopes she can have as big an impact on fans as the shameless man-eating ­character played by Kate Ford.

Charlotte also reveals she was mistaken for a wardrobe assistant by one of the soap’s leading stars and tells how she was worried she may not be able to pull off a northern accent properly.

Speaking of her ambitions for the role of Daisy, she says: “I’d love her to be an iconic bad girl, why not?

Corrie bosses are lining up a romance for Daisy.

Charlotte adds: “She is aware of her effect on men and uses that to her advantage. There are plans to put her with somebody who is very different to her, which would be an exciting contrast.” Charlotte began acting as a child, competing in ballet and singing competitions before landing the role of young Eponine in Les Miserables in the West End when she was 11.

Later that year she made her TV debut in police drama series The Bill.

Charlotte has b een dating Paul for two years. Recalling the first time she met his family and told them she was an actor, she says: ‘They said: ‘Can you get on Corrie, we love Corrie.’ I said, ‘It doesn’t quite work like that.’ But it turns out that yes, I can get on Corrie. So they now think I’m a real actor.”