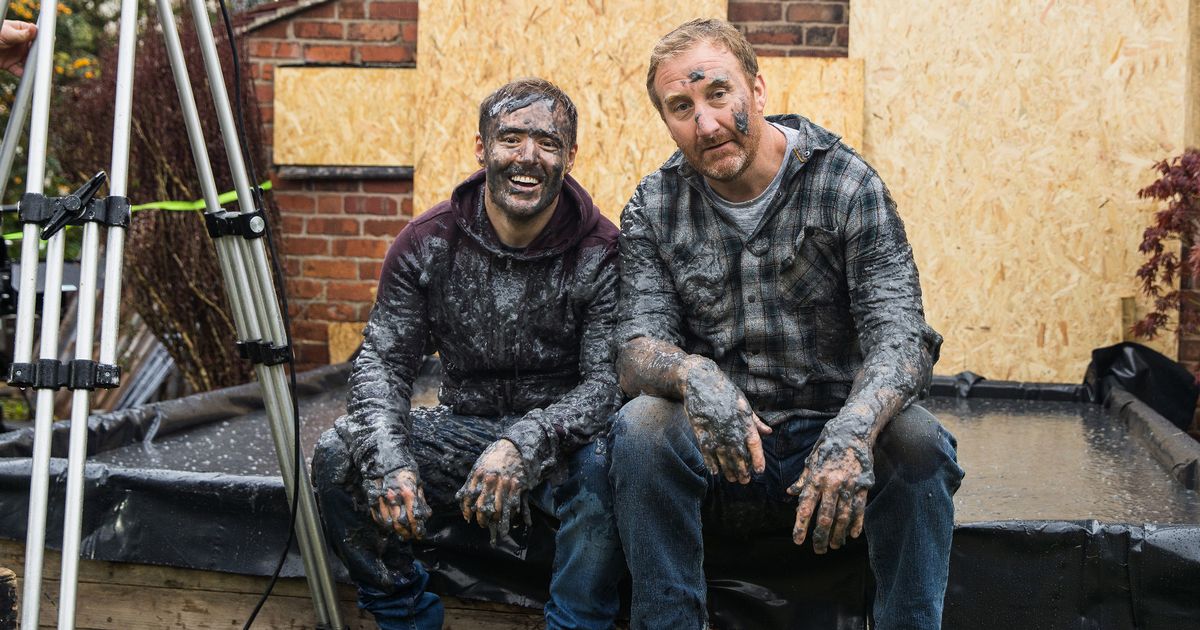 Coronation Street star Alan Halsall is due to go head-to-head with Jamie Kenna on wet concrete next week as the pair, who play Fiz’s ex Tyrone and her current squeeze Phill, face-off after it is revealed the latter is writing a book about her murderous ex-husband John Stape

Behind the scenes for the Coronation Street fight

Coronation Street star Alan Halsall says his upcoming screen fight in wet concrete with Jamie Kenna was painful to do but worth it for the soap’s classic laughs.

The pair, who play Fiz’s ex Tyrone and her squeeze Phill, will be seen scrapping next week, after it emerges Phill is writing a book about her murderous ex-husband John Stape.

Asked if he enjoyed the scenes, which include the pair having to hose each other down in their undies, Alan admitted: “No, not really.

“Of course, when we got the Zoom meeting to say, ‘Would you mind stripping off down to your pants?’, well, we’re actors, this is what we’re paid to do.

“But I can’t say I was looking forward to it. It was a freezing day so to be wet in a garden somewhere wasn’t a great deal of fun.”

Fiz’s ex Tyrone and Phill, will be seen scrapping next week

Audiences loved seeing the pair go at it with a unicorn and an inflatable sword at Christmas.

“I think the writers quite liked the small man, large man fight scene,” he sighed.

“So this time they thought they’d dip us in wet concrete. I think people appreciate that bit of humour.

Jamie said he did feel insecure about his physique after agreeing to strip for the storyline.

“I then went on an all-inclusive holiday where I was situated very close to a San Miguel tap while Alan basically moved into his local gym.”

As Phill scours the wet concrete it emerges he has lost an engagement ring despite Tyrone’s own hopes for him and Fiz.

The scenes kick off on ITV next Monday and play out across the week.