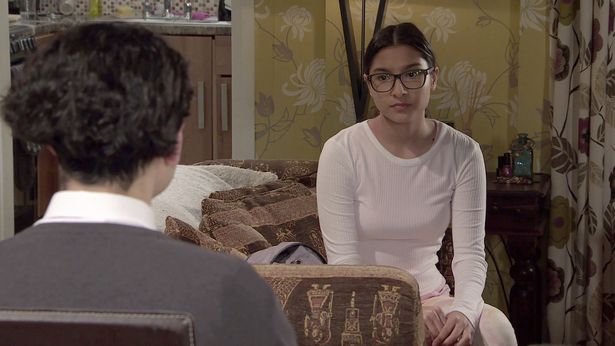 Revenge is on the cards after a devastating few weeks on Coronation Street.

Following Seb Franklin’s tragic death, his family and friends are desperate for answers as to what really happened that fateful night.

But as a plan to find out the truth is underway, could it all go disastrously wrong?

Meanwhile, another returns home to a shock as he sees his wife cosying up to another man. Is their relationship all over?

Here’s what’s coming up on Coronation Street next week…

Asha vows to bring down boyfriend Corey in secret plan

Asha Alahan will secretly work against her boyfriend Corey Brent.

Amid fears the teen is being controlled by her vile partner, it appears she’s on to him and desperate for him to face justice.

He was involved in the hate crime attack on Seb Franklin and Nina Lucas last week, with the couple targeted because of Nina’s gothic appearance.

Ronnie has been staying in the pub owned by Jenny and her husband, and next week the revelation he has a wife leaves her gutted.

He soon apologises for lying before asking for another chance, while it remains to be seen if Jenny will forgive him.

That said, she’s left reeling when her husband walks through the door with a bunch of flowers.

Ronnie is with her at the time, but will it raise suspicions?

It’s not yet clear whether the pair will give into their feelings and have an affair, but it’s definitely hinted to be the case.

Ronnie tells Johnny he’s collecting his things as a recent B&B guest when they’re interrupted by his return.

But should Johnny watch out, and is he at risk of losing Jenny for good?

*Coronation Street airs weekdays at 7.30pm and 8.30pm on ITV