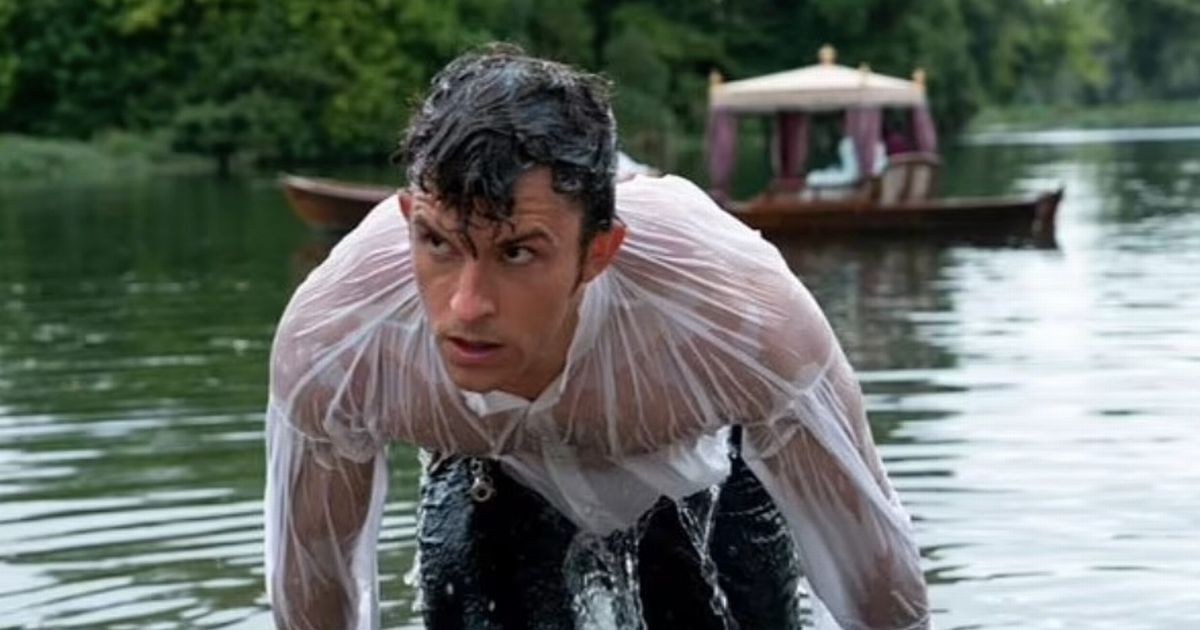 As expected, the second season of Bridgerton has some scenes guaranteed to get pulses races. Those who have binged the Netflix drama already have been enjoying one clip staring lead Jonathan Bailey in particular

Period drama Bridgerton returned to Netflix on Friday, and fans have been enjoying one steamy scene in particular.

Based on Julia Quinn’s best-selling novel, The Viscount Who Loved Me, the second season of the regency romance focuses on the love life of Lord Anthony Bridgerton, played by actor Jonathan Bailey.

In one saucy scene during the fifth episode of the smash-hit drama, Jonathan, 33, gets fans hot under the collar when his on-screen character pops out of a lake dripping with water in a see-through white shirt.

Viewers who have binged the series within hours of its release have already picked up on how the scene resembles a Colin Firth’s stint in a wet shirt.

Many have flocked to social media to share side-by-side comparisons of Jonathan and Colin, 61, as dashing Mr Darcy in the BBC’s 1995 adaptation of Jane Austen’s Pride and Prejudice.

“The Viscount Bridgerton goes Mr.Darcy,” one fan captioned their comparison snaps on Twitter on Friday – adding some water-themed emojis.

“Buckle up babes season 2 of Bridgerton is out and we got a water scene similar to Mr. Darcy in 1995,” another wrote, with a third adding: “The similarities between Anthony and Mr. Darcy this season though.”

“A wet Colin Firth for a new generation,” another viewer cheekily observed, with an additional tweet reading: “Oh Bridgerton, when I saw I saw that wet white shirt clinging to Anthony’s chest. I know you were footnoting Colin firth and I thank you from the bottom of my heart.”

Earlier this week, the country’s new wet-shirt pin-up Jonathan revealed how he got into shape for the raunchy scenes in the latest offering from the Bridgerton family.

Netflix viewers have been loving the tribute

He told new! magazine: “Stepping into the shoes that Phoebe Dynevor [who returns as Daphne] and Rege-Jean Page wore and led with so gracefully last season has taught me a lot.

“Taking on that responsibility has been amazing for so many reasons. This season required a lot of staying calm and steady and ready. It’s kept me on my toes. I got really fit, I made sure to eat well and get loads of sleep, and everything else just seemed to fall into place.”

The actor also offered his thoughts on why he thinks the first season of the period drama was such a global success, following its release on Christmas Day 2020.

After the eight-episode first season received positive reviews, and dominated social media conversations, Bridgerton quickly became the most watched series on Netflix at the time of its premiere – with a viewership of 82 million households.

He mused: “It’s been a wild few years for the world, and I think part of that led to the success of Bridgerton. It came at the right time and knocked everyone off their feet. It gave people the Christmas romance we deserved after a really tricky year.”

*Season two of Bridgerton is available to stream worldwide on Netflix now.