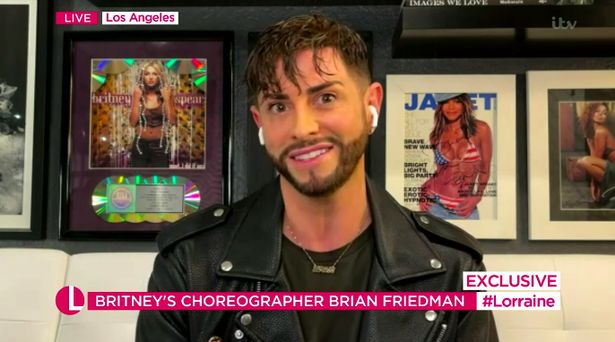 Brian Friedman has claimed that it’s “impossible” to get in touch with Britney Spears and believes it’s due to the conservatorship.

Appearing on ITV’s Lorraine on Friday morning, the 43-year-old dancer opened up about his friendship with the pop star and how she has changed over the years.

“We go back to 1999 in the beginning of her career. [She was] joyful,” he told Lorraine Kelly, as he spoke live from his home in Los Angeles.

“I think that was the best years, some of the best years I had as a performer, getting to travel the world and do what you love. I know for her it was her dream.

“I have missed that sparkle and I haven’t seen that exact glimmer in a very long time. There was definitely a wall that was put up and I don’t believe it’s a wall she put up.

“It was just this barrier that was created because of the conservatorship,” the choreographer claimed.

Brian features in a new BBC documentary called The Battle for Britney: Fans, Cash and a Conservatorship, where he speaks to journalist Mobeen Azhar about Britney’s legal issues.

The hour-long documentary is available to watch on BBC iPlayer from Saturday 1 May.