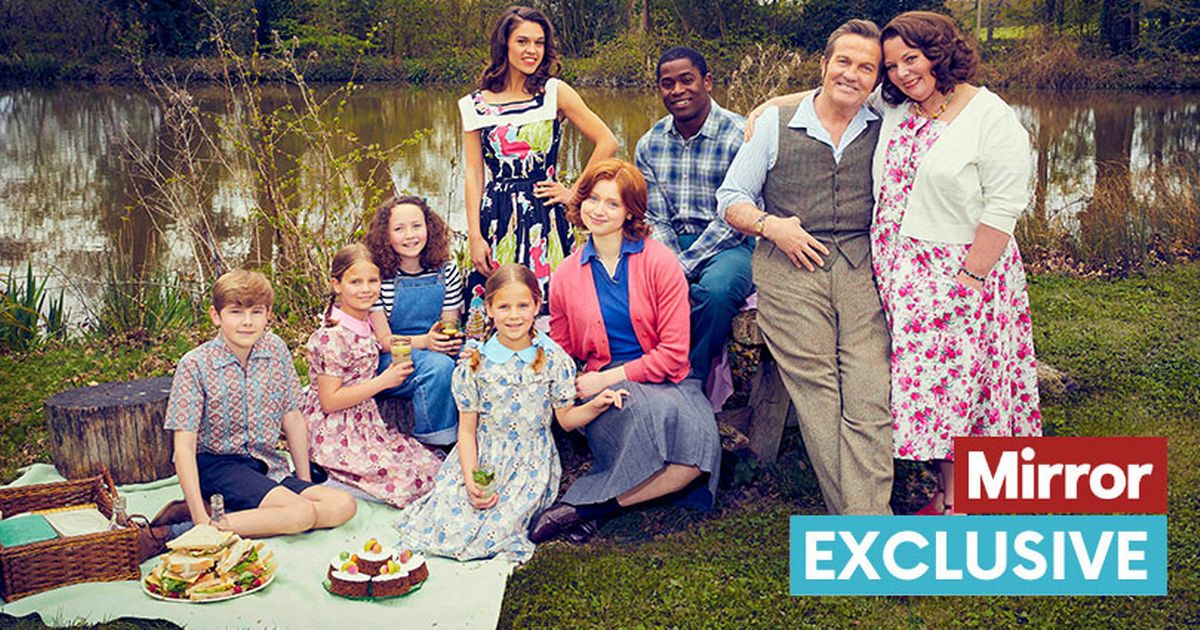 It’a been 30 years since the gentle, feel-good comedy of The Darling Buds of May first appeared on our TV screens.

The original adaption of H E Bates’ whimsical stories of English country life in the 1950s, starring David Jason and Pam Ferris, was a huge hit, and launched the career of Catherine Zeta-Jones.

But next month a fresh crop of Larkins will make their debut in a new adaptation and according to star Bradley Walsh, the post-lockdown timing is absolutely perfick!

“The original Darling Buds was such a success because the country was in the grip of a recession in the 90s when it was shown,” says Bradley, 61.

“After the 18 months we’ve all been through, everyone’s going to be falling in love with the Larkins all over again.

“This is a world rooted in family and community and giving and love. The timing couldn’t be better.”

Joanna Scanlan, star of The Thick of It and No Offence, plays Ma Larkin opposite Bradley’s Pop Larkin and she couldn’t agree more. She became a fan of the free-wheeling, fun-loving Kent family when she was 14.

“I was poorly and had to stay in bed for a couple of weeks,” she says.

“My mum bought me a little box set which had the five books in it called The Larkin Saga. I still have that collection of books to this day.

“I absolutely fell in love with the Larkins. They put two fingers up at everything that didn’t count and embraced everything that did. The spirit of the books – here’s a family who are vulgar, ribald, fun, but with a wise way of life – really appealed to me and cheered me up as I gradually got better.

“I felt I could get through anything with Ma Larkin holding my hand. She’s loving and warm but real and flawed. She’s not a victim, just a happy woman who’s spreading the love, someone who knows that kindness is the solution to most of life’s problems.”

Family is the central core of this story, she says, and marriage is at the heart of that family.

“The stories are recognisable,” Joanna, 59, adds. “You could transplant them to pretty much anywhere in the world, because they’re about the fundamentals.”

The love affair at the heart of the Darling Buds of May, of course, was the one between Pop and Ma Larkin.

“Those six kids didn’t come from nowhere,” she laughs. “Pop and Ma obviously still really fancy each other. It was the poet Philip Larkin – no relation – who famously said sex wasn’t invented until 1963. But this was the end of the 50s and Pop and Ma could tell a different story.”

Bradley has a slightly different take on their bedroom scenes – they were electric, he says, but for the wrong reasons.

“They were some of the most frightening experiences of my life,” he says. “Jo would wear a Bri-Nylon nightie. I’d have to have a crew member holding a lightning conductor so I could earth myself. Sparks flew.”

As the woman who keeps the show on the road – Joanna describes her as “the fortress” – Ma has eight mouths to feed, so there was a constant supply of fabulously fattening 50s-style food covering the family’s kitchen table.

“Everything was edible and delicious,” says Joanna. “It was like going back into my grandmother’s kitchen. We had a wonderful home economist and yes, all the food was real with the exception of one pie which had genuine pastry on the outside but was empty.”

Certainly, Bradley took away a lasting reminder of all those tempting dishes. “The filming schedule lasted 14 weeks,” he says, “I put on half a stone. I’ve just had to be measured for larger costumes.”

The calorific diet wasn’t the only hazard of country life the Dr Who and Coronation Street actor found challenging. “I almost got crushed by Betty the pig at one stage,” he says, “and I inhaled Loratadine tablets because the hay fever count was so high.”

By contrast, Bridgerton star Sabrina Bartlett, 30, in the Zeta-Jones role of the Larkins’ eldest daughter Mariette, was in her element.

“I grew up in Kent,” she says, “riding horses with my little sister so, when I read the scripts, I felt such a connection to the role and her environment.”

She deliberately didn’t watch old episodes of The Darling Buds of May. “I wanted to bring my own interpretation to the role,” she admits, “to get out from under Catherine’s shadow.”

Another thing she was delighted to get out of was the corset she wore as opera singer Siena Rosso in Bridgerton. “It felt such a release to get muddy and wear Wellington boots and ride a horse in the rain,” she says.

“It was a complete joy to be part of a world of burping and farting and piglets running around, in many ways, back to my feral upbringing. And Mariette is so spirited.”

Bradley in Doctor Who
(

She’ll need to be as the new series show her handling two very different suitors who vye for her attention – Charley the taxman, played by Tok Stephen, and suave smoothie Tom Fisher (Stephen Hagan). The new Darling Buds adaptation, called The Larkins, was written by Simon Nye, the king of Sunday night family viewing, who had a huge hit with The Durrells, which stars Keeley Hawes.

“It’s so nice to be writing something that doesn’t involve death and destruction,” he says. “The only creature to perish was a goose.”

All the adults, meanwhile, have nothing but praise for the youngsters who played Mariette’s siblings.

Joanna says: “I really hope they don’t take up acting as a career because I’d like to appoint them as my accountant and solicitor. They are the most competent, brainiest young girls I’ve ever met. And, in 14 weeks, I never saw them, or any of the kids, take out a phone.”

There are well-known faces in other roles: Peter Davison is a sweary vicar; Robert Bathurst an over-the-top actor; Amelia Bulmore plays the village spinster, Edith Pilchester.

ITV bosses are so pleased they’ve already commissioned more before the first episode is screened.

Joanna reveals that the cast were reunited recently to film a Christmas special. “It has all the ingredients that Simon brought to the first six episodes but with a real twist in the tale.

“That said, though, it’s still full of the love and warmth you associate with the Larkins, something that Christmas is all about.”