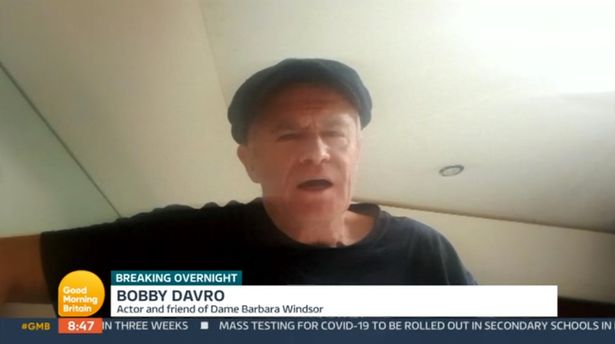 EastEnders’ Bobby Davro has reached out to Dame Barbara Windsor’s husband after the sad news of her death.

Scott Mitchell announced yesterday that his wife had died in a London care home at the age of 83 following an Alzheimer’s battle.

Having been diagnosed in 2014, Barbara went public with her condition four years later and used her platform to campaign for better care for dementia patients.

Now Bobby Davro, who played Vinnie Monks on the Square, has paid sweet tribute to his co-star.

And Bobby took the time to send a touching message to devastated Scott.

“Keep smiling, Scott,” Bobby said on Good Morning Britain, “You were incredible to her.”

“It was not the ending that Barbara or anyone else living with this very cruel disease deserve.

“I will always be immensely proud of Barbara’s courage, dignity and generosity dealing with her own illness and still trying to help others by raising awareness for as long as she could.”