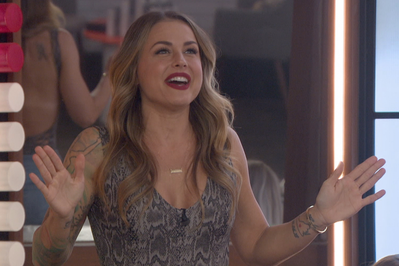 Don’t tell the kids: Christmas could not be saved! Despite making it to final four in Big Brother All-Stars, Christmas Abbott jingled all the way out of the house Thursday night.

The Season 19 alum was safe for much of the season due to being part of the house’s large alliance, the Committee. She was particularly tight with Memphis Garrett, but when he was evicted last week and Enzo Palumbo won Head of Household, the writing was on the wall for Abbott’s eviction. She was put on the block alongside Nicole Franzel. Abbott attempted to persuade both Cody Calafiore and Palumbo that she would be a better final two than Franzel, a former winner, but they stayed true to their alliances with Franzel. Calafiore won Power of Veto, and he voted to send Abbott out of the house as the single vote.

Abbott spoke with TV Guide from the jury house about whether she thinks Palumbo and Calafiore made the right move, how it felt playing Big Brother without a broken foot, and what reality show she might tackle next.

You mentioned in your interview with Julie that you noticed a couple weeks ago that Nicole, Cody, and Enzo were working together. Is there anything you wish you had done differently earlier on to get to final three?
Christmas Abbott: I noticed that Nicole, Cody, and Enzo had been working together for weeks before my eviction. And I don’t know if there’s anything that I could have really done differently to get to the final three by breaking up that trio other than not making the mistake and dropping that pumpkin in the HOH that Nicole won. You know, it was a good win for her. But I was so far ahead and that was such a great competition for me. And I made a mistake, and that mistake cost me my game.

Big Brother All-Stars: The Best and Worst Moments So Far

Do you think Enzo made the right game move putting you and Nicole up, and do you think Cody made the right game move sending you home?
Abbott: I think Enzo made a good game move by putting me up because of his alliance with Cody and Nicole. He was showing Cody that his loyalty was with him. Now, did I like that game move? Absolutely not [laughs]. But for Enzo, it was a better game move. I don’t know if Cody made a good game move sending me home. I definitely was serious when I told him that I would take him to final two. And at that point, Enzo had already betrayed me several times. And you lose status with me when you do that. So not taking me to final three really decreased his shot of actually going to final two.

If you could start the season over, is there anyone you would align with who you didn’t the first time around?
Abbott: If I could start the season over, I would most likely try to align with Nicole individually earlier on. I just really loved her game. I love her personally as well. And we were just really able to play together well throughout the whole season. So I wish that I had a stronger working relationship with her.

The first time you played you were injured pretty early on. How different was it getting to play to the best of your ability this time?
Abbott: I’m so excited that I got to play at full capacity this season. It was an entirely different experience. I had the best time, and I loved that I was able to show up. I won five comps — the most out of all the females. And also, I think the second most out of everybody else in the house up to my eviction. It was a lot more fun [laughs]. I got to be me, I got to be loud and strong, and ferocious and fierce. And that was pretty amazing.

What else was different between Season 19 and All-Stars?
Abbott: The biggest difference between Season 19 and All-Stars, for me, I got to actually play in the comps and compete the way that I wanted to. And I really got to play the game that I wanted to play. I was able to implement the social strategies that I was looking at or thinking about, I got to make the alliances that I wanted to. And, ultimately, I was playing with all vets — and very, very experienced vets. This was such a sophisticated game that you really, really have to be a big fan of Big Brother to understand or to really grasp the depth of the levels that we were playing on. And it was really impressive. Everybody was so impressive. Everybody played really hard.

You are a really strong competitor! Do you have any interest in other reality shows like The Challenge or Survivor?
Abbott: I love competition. It just makes me so happy, and I do have interest in other reality shows. Hey! [laughs] … I would love to kind of get some calls and see where my little ferocious competitor can go with this. I mean, I just love competition. So if I’m able to go hard and get at it, I’m interested.