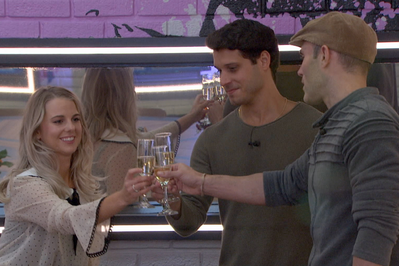 You know what Julie Chen says: Expect the unexpected. But this is 2020, so Big Brother All-Stars, played exactly the opposite of how many of us Big Brother fans would like: It’s been expected. After being part of The Committee—the large alliance who dominated the house nearly the entire season—Nicole Franzel and Cody Calafiore found themselves in the final three along with Enzo Palumbo (who was basically part of The Committee as well). And the winner was who many of us predicted it would be weeks back.

Earlier in the week, the final three houseguests played out part one of the three final Head of Household competitions. The well-known endurance competition saw Palumbo drop out first, and Franzel was able to hold out longer than Calafiore. That meant that Palumbo and Calafiore had to go head to head next.

For the second comp, the houseguests had to walk across a balance beam while swinging giant hogs at certain intervals in order to take three photos with no hogs in view. It proved to be quite complicated for Palumbo, who took more than 30 minutes to complete it, as opposed to Calafiore, who did it in just over four. Palumbo didn’t handle his loss well and tried to convince Franzel that neither of them could win against Calafiore.

But it doesn’t matter: Calafiore beat Nicole in the final, live competition—by only one point. In a flashback to Season 16, Calafiore had to select the last person to be evicted from the All Stars house. Both Franzel and Palumbo pled their cases, saying that they were loyal number twos to him the whole season. But with tears in his eyes, Calafiore evicted Franzel. Full of tears herself, Franzel told Chen in her exit interview that she didn’t see it coming at all, but she applauded Calafiore’s game play and said she doesn’t hold grudges.

Franzel joined the other eight members of the jury so they could grill the final two houseguests. Calafiore had a big resume this season, and he didn’t miss a beat in boasting about it: He won four HOHs, four vetos, and achieved in playing a more aggressive game than his first season. Palumbo, on the other hand, said he used Calafiore “as a weapon” by manipulating him with his social game; “and I won some competitions,” he added. He was able to say that no one targeted him, but Calafiore pointed out that he did get put on the block just that evening.

But it seemed that most of the jury had their mind set before hearing the answers to the questions or the speeches from the final two. Cody Calafiore was named the season’s winner—and joins Dan Gheesling as the only other winner to receive a unanimous vote. And the winners don’t stop there: Da’Vonne was awarded America’s Favorite Houseguest.

And that’s a wrap on Big Brother: All Stars. As with everything in 2020, we can always hope for better next year!