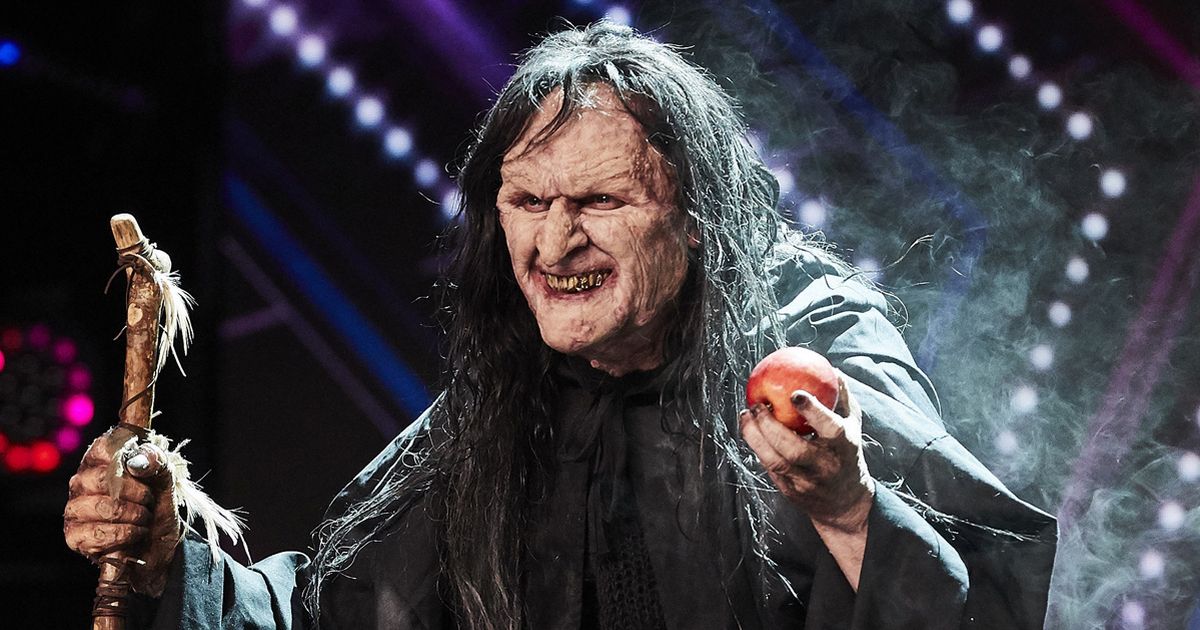 Britain’s Got Talent returned for another thrilling instalment on ITV with judges Simon Cowell, Alesha Dixon, David Walliams and Amanda Holden as well as hosts Ant McPartlin and Declan Donnelly

Britain’s Got Talent viewers have theorised who they think could be behind The Witch’s facial prosthetics after the creepy act made her debut in the latest instalment of the ITV show.

The Witch took to the BGT stage only to approach the judging panel and scare the bejeezus out of Simon Cowell, Amanda Holden, Alesha Dixon and David Walliams.

The contestant handed out apples from a sinister sack to David, Alesha and finally Amanda while reciting a creepy chant.

Amanda had a pristine apple in her hand, which The Witch crushed up to reveal creepy crawly maggots and cockroaches, which scattered the judge’s desk.

Alesha jumped out of her seat and fled the judging panel in fright after the explosion of insects, saying she would not return until they had been cleared.

BGT viewers took to Twitter to share their thoughts on the creepy stunt, with many taking guesses at who could be under the prosthetics and makeup.

Several suggested that the contestant could be none other than one of the ITV talent show’s hosts, Ant McPartlin or Dec Donnelly.

“I think ‘The Witch’ is Dec in disguise!” wrote on person, as another person said: “That witch actually looked like Ant on an undercover! Haha”.

Another viewer said: “When that witch came out I thought it was Ant undercover and I don’t know why”.

“No, why does the witch actually look like Ant?” someone else suggested.

Alesha Dixon apparently fled away from the judges desk in terror, in scenes to air on Saturday night’s BGT, with Amanda Holden branding the audition ‘horrible’
(

Elsewhere in Saturday’s instalment of the show, Britain’s Got Talent viewers were distracted as many claimed they recognised a contestant in dance troupe 5 Star Boys from BBC One dance competition The Greatest Dancer.

Five schoolboys took to the stage of Britain’s Got Talent and said they were performing to take a stand against the bullying they faced because of their passion for dancing.

The young dancers – Toby-Jay, Ollie, Joey, Beau and Adam – formed the group 5 Star Boys after they met at a dance convention in Birmingham and performed an emotional routine on the ITV stage in Saturday’s episode.

Their performance of You Will Be Found, from the hit musical Dear Evan Hansen, touched on their bullying ordeal.

Pictures show the moment the act holds the apple, before approaching the two judges
(

As the boys performed, several Britain’s Got Talent viewers took to Twitter to congratulate them on the routine, with some even deeming it Golden Buzzer-worthy, while several ITV fans also said they thought they recognised one of the dancers from another TV show.

Another tweeted: “Think one of the boys was on The Greatest Dancer,” as a fourth wrote: “The Five lads were good, one of those lads was on Britain’s Greatest Dancer with Alesha on BBC couple of years back.”

Another posted: “ITS JOSEPH off the greatest dancer.”

Fans seemed to recognise one of the boys as Joseph Chow, who was one of the acts on the BBC talent show and proved popular with the show’s dance captains Cheryl Cole, Matthew Morrison, Oti Mabuse and Todrick Hall.

Britain’s Got Talent 2022 continues Saturday at 8pm on ITV.