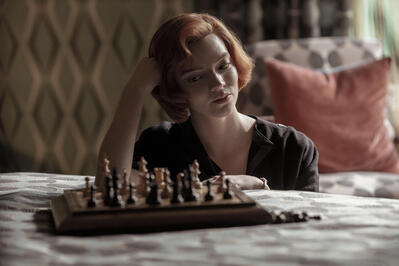 Looking for something new to watch on Netflix? You’ve come to the right place. Here are the best new shows and movies releasing on Netflix the week of Oct. 23-29, 2020.

This week’s marquee Netflix release is the limited series The Queen’s Gambit, a character-driven period piece that may earn star Anya Taylor-Joy an Emmy nomination next year, starting her destined run as a perennial awards contender in the future. Other than that, there’s the usual mix of international fare, kids’ stuff, comedy, anime, dumb holiday rom-coms, and documentaries. I might wanna check out the archaeological docuseries Secrets of the Saqqara Tomb. That looks cool.

All titles debut on Friday, Oct. 23 unless otherwise noted. Here’s what came out on Netflix last week.

If you’re looking for even more hand-picked recommendations, we have plenty. If you’d like to see the best of what’s coming out on Netflix in October, here are our Editors’ Picks for Netflix’s October releases and everything that’s coming to the service in the month.

The Queen’s Gambit
Future superstar Anya Taylor-Joy (she’s been cast as young Furiosa in the next Mad Max movie) stars in this literary adaptation as Beth Harmon, a brilliant but troubled chess champion in 1950s Kentucky. She was an orphan who, in her youth, developed an incredible skill for the game but also a debilitating addiction to pills, which quiet her obsessive mind. It’s a detailed character study of brilliance and madness that’s usually reserved for male characters. It comes from one of Netflix’s go-to limited series producers, Godless‘ Scott Frank.

Sarah Cooper: Everything’s Fine
This is the first comedy special from TikTok sensation Sarah Cooper, whose lip-synced impressions of Donald Trump made her a big star with the #Resistance set. It remains to be seen how well she does with material she wrote herself, but we’ll find out after this! She’s enlisting some A-list help, including Ben Stiller, Helen Mirren, and Whoopi Goldberg, and it’s directed and executive-produced by Natasha Lyonne. Netflix describes the special as “an hour of funny single-camera vignettes dealing with issues of politics, race, gender, class, and other light subjects.” (No trailer yet / Tuesday, Oct. 27)

Over the Moon
This animated family movie is inspired by a Chinese folktale about the moon goddess Chang’e. A girl whose mother died builds a rocket ship to the moon to prove that the moon goddess is real. Oscar winner Glen Keane directs, and the voice cast includes Philippa Soo, John Cho, Margaret Cho, and Ken Jeong.

Barbarians, Season 1
A Germanic tribe battles the Romans in 9 A.D. in this German-language historical epic. For fans of Vikings. (Trailer)

Move
A docuseries about contemporary dancers and choreographers. Meet the next Alvin Ailey (that’s the first famous dancer I thought of). (No trailer yet)

Pérdida, Season 1
A man intentionally gets sent to the worst prison in Colombia in order to get revenge on the man who he believes kidnapped his daughter in this thriller series of Spanish origin. Not to be confused with the 2018 Argentinian movie Pérdida, which is also on Netflix. (Trailer)

Blood of Zeus
This anime is rendered in an ’80s style (think Thundercats) that looks very cheap and weird. Is it supposed to look like that? I don’t know! Anyway, a guy named Heron is the chosen one because he’s the son of Zeus, which, you know, get in line, kid. You ain’t that special. Zeus has a lot of sons. (Trailer / Tuesday, Oct. 27)

Guillermo Vilas: Settling the Score
This documentary is about an Argentine sports journalist who is obsessed with proving that his countryman Guillermo Vilas was actually the No. 1 tennis player in the world in the ’70s, and a conspiracy in international tennis’ governing body denied him his rightful place at the top of the rankings. (Trailer / Tuesday, Oct. 27)

Holidate
The title makes this seem like a Christmas rom-com, but it’s not. It’s every holiday. Emma Roberts and Luke Bracey play single people who make a deal to be each other’s dates to holiday parties, therefore avoiding awkward conversations about why they’re still single. Guess what happens. (Trailer / Wednesday, Oct. 28)

Nobody Sleeps in the Woods Tonight
But what if I wanna sleep in the woods tonight! This is a weird, kinda goofy Polish horror movie about teenagers who go to a technology detox camp deep in the forest, where a killer starts picking them off one by one. Dun dun dunnnn!!!! (Trailer / Wednesday, Oct. 28)

Secrets of the Saqqara Tomb
This docuseries follows a team of Egyptian archaeologists as they explore a previously undiscovered tomb that had been miraculously untouched for over 4000 years. It’s a fascinating look at an extraordinary historical find. (Trailer / Wednesday, Oct. 28)

Stop searching, start watching! TV Guide’s Watch This Now! page has even more TV recommendations. And check out our picks for the best Netflix shows and movies to watch in October.