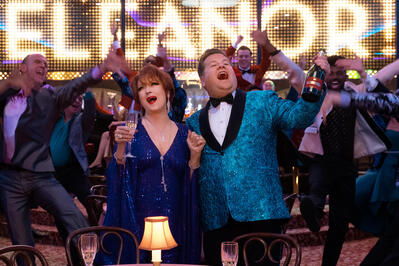 Looking at the new releases on Netflix this week, you just have to shrug your shoulders and hope things are better next week. This is that we have become. We think we deserve amazing shows and movies EACH WEEK from Netflix. Are we that vain? A year ago, we were happy to get one show we loved from all of TV in a month. Now, we’re sad when Netflix goes dry for seven days. Quarantine has turned us into selfish monsters. That said, c’mon Netflix! Do better!

All titles debut on Friday, Dec. 11 unless otherwise noted. Here’s what came out on Netflix last week.

If you’re looking for even more hand-picked recommendations, we have plenty. If you’d like to see the best of what’s coming out on Netflix in December, here are our Editors’ Picks for Netflix’s December releases and everything that’s coming to the service in the month.

The Prom
Ryan Murphy (Hollywood, The Boys in the Band, a bazillion dollar Netflix contract) turns the Murphy-meter up to 11 in The Prom, a musical comedy movie about self-important Broadway stars who travel to Indiana to help a high school girl get the prom experience after the school bans her from attending with her girlfriend. It is getting what I will kindly call mediocre reviews. As usual, Murphy draws talent, with Meryl Streep, James Corden, Nicole Kidman, Kerry Washington, Andrew Rannells, and Keegan-Michael Key in the cast.

Hilda, Season 2
The great thing about Netflix is that there are all sorts of gems hidden if you just know which rocks to flip over. The British-Canadian animated series Hilda is one of those, a darling kids show based on the graphic novel that’s full of imagination and wonder at every turn. The titular Hilda is a girl whose curiosity leads her to encounters with all sorts of creatures, from spirits to trolls to gromes, and she’s accompanied by perhaps the cutest critter in all of television, her pet deerfox Twig (you heard me, Baby Yoda!). This isn’t one of those shows that gets four seasons a year to pump out content as quickly as possible, it’s done with care. Season 1 came out in 2018. [Trailer / Monday, Dec. 14]

Giving Voice
Viola Davis and John Legend executive produce this documentary honoring the late playwright August Wilson by detailing the August Wilson Monologue Competition, which gives underprivileged youths an outlet to perform stirring monologues on Broadway. Yeah it’s passé to say they’re all winners, but watching these kids discover who they really are and what they can do is incredibly powerful stuff, no matter who “wins.” Keep a hanky on hand for this one. [Trailer]

Tiny Pretty Things, Season 1
Any show about young women at some sort of learning institution with the words “tiny” and “pretty” in it is asking for comparisons to Pretty Little Liars, so let’s go with that. This time, the series takes place at an elite dance academy where a young Black woman from Chicago is thrust into the school to replace a prized dancer who pirouetted to an untimely demise. It looks like the cutthroat competition gets to some of the girls, to the point where attempted murder may be in the mix, in this twisty thriller. [Monday, Dec. 14]

Canvas
Another animated special, but this one isn’t for kids. The short film follows an elderly gentleman who loses his inspiration to paint, but years later finds the will to pick up the brush again. [Trailer]

The Mess You Leave Behind, Season 1
I don’t know how you say SO MUCH DRAMA in Spanish but this film from Spain has it. A teacher joins a new school, taking over the post vacated by a teacher who committed suicide, and finds hostile students, plenty of mysteries that aren’t easy to solve, and death threats. All that and she gets paid a teacher’s salary? No thanks! [Trailer]

A California Christmas
An executive bro from San Francisco gets an order from his boss to buy some land off an old farmer (and his attractive and unattached daughter) with Christmas as a deadline in this schmaltzy holiday movie that wasn’t good enough for Hallmark Channel. [Trailer / Monday, Dec. 14]

Song Exploder
The music docuseries, in which artists blow up some of their most famous songs, returns with episodes featuring Nine Inch Nails, Dua Lipa, and more. It is my understanding that “blow up” in this context means break down and explain the creation of. [Trailer / Tuesday, Dec. 15]

Anitta: Made in Honorio
This documentary follows Brazilian funk-pop queen Anitta through her life, and you know what? It looks like she lives a pretty great life. [Trailer / Wednesday, Dec. 16]

How to Ruin Christmas: The Wedding
Step 1: Hold a wedding on Christmas! The South African comedy series follows the family black sheep as she tries to repair the damage she did to her family after ruining her sister’s wedding. Which, I will remind you, was held on Christmas. I think I’m on her side. [Trailer / Wednesday, Dec. 16]

The Ripper
This docuseries details the Yorkshire Ripper, a serial killer who terrorized north England in the mid-to-late ’70s, and the efforts that went in to capturing him. [Trailer / Wednesday, Dec. 16]

Run On
Korean dramas are so great. They’re all similar — two hours of meet-cute — just with different occupations for the main characters. This time it’s a track star and a film translator. How precious is that? [Trailer / Wednesday, Dec. 16]

Vir Das: Outside In – The Lockdown Special
Indian comedian Vir Das used quarantine to put together this special in which he ruminates over the new world and how, for once, something isn’t Pakistan’s fault. [Trailer / Wednesday, Dec. 16]

Stop searching, start watching! TV Guide’s Watch This Now! page has even more TV recommendations. And check out our picks for the best Netflix shows and movies to watch in December.