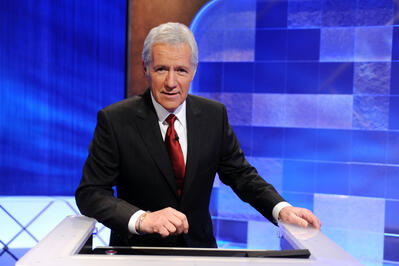 After a long, very public battle with pancreatic cancer, Jeopardy! host Alex Trebek has died. He was 80 years old. According to a statement given by the official Jeopardy! Twitter, Trebek passed peacefully at home, surrounded by family and friends.

The beloved game show host, whose sense of worldliness and intelligence became a hallmark of the show since its 1984 revival, succumbed to the disease on Nov. 8. Back in July, Trebek released a memoir he wrote during COVID-19 lockdown, titled The Answer Is …: Reflections on My Life.

Trebek was born in Ontario, Canada, and became a naturalized citizen of the United States in 1998. He studied philosophy in school and aspired to become a broadcast journalist. Trebek dabbled in game show hosting very early on in his career, though, with several programs under his belt before Jeopardy! including Canada’s Music Hop, Reach for the Top, Strategy, The Wizard of Odds, CBS’s Double Dare, The $128,000 Question, High Rollers, Battlestars, The New Battlestars, the defunct Pitfall, and NBC’s Lucky Numbers.

It wasn’t until Merv Griffin revived Jeopardy! (which was previously hosted by Art Fleming from 1964-75 and rebooted with Fleming on board from 1978-79 at NBC) that Trebek would find a permanent foothold as host and producer. He continued to experiment with other programs all the same, including Classic Concentration, which re-teamed him with Mark Goodson after their work together on Double Dare, and To Tell the Truth.

While on Jeopardy!, Trebek became famous for his knack for accents, his signature mustache, and his encyclopedic knowledge of world history and culture.

In 2014, Alex Trebek became the Guinness World Record holder for most game show episodes hosted by the same presenter as he reached his 6,829th episode of Jeopardy!

Trebek also did a bit of acting throughout the course of his fame, appearing as himself — or a parody version of himself — in shows like Cheers, Rugrats, Beverly Hills, 90210, The Nanny, The Golden Girls, How I Met Your Mother, The Simpsons, and Orange is the New Black, to name a few.Trebek won several Daytime Emmy Awards for his work on Jeopardy! and even collected a Lifetime Achievement Award from the Emmys in 2011. He previously earned a star on the Hollywood Walk of Fame in 1999.

He was also active in philanthropy, donating funds to educational institutions including his alma mater the University of Ottawa, and he also traveled with the USO and lent his talents to children’s literacy competitions like the National Geographic Bee.

Upon announcing his stage four pancreatic cancer diagnosis to the world in early 2019, Trebek vowed to fight for his life, despite the odds being stacked against him.

“Normally, the prognosis for this is not very encouraging, but I’m going to fight this, and I’m going to keep working. And with the love and support of my family and friends and with the help of your prayers also, I plan to beat the low survival rate statistics for this disease,” he said in a video address to fans. “Truth [be] told, I have to! Because under the terms of my contract, I have to host Jeopardy! for three more years! So help me. Keep the faith and we’ll win. We’ll get it done. Thank you.”

Speaking about his legacy, Trebek said, “I hope I’ve been an influence for good and an influence for the benefits of not minimizing the importance of knowledge in one’s life. The benefits of knowledge. Even though you are not going to use a particular bit of knowledge, information that you acquire — even if you are not going to use it in your daily life, your work life or whatever — it becomes part of you and enriches you and makes you a better human being and I think a more understanding human being.”

Trebek previously survived two mild heart attacks and a subdural hematoma. He is survived by his wife Jean Currivan-Trebek and two children, Matthew and Emily.