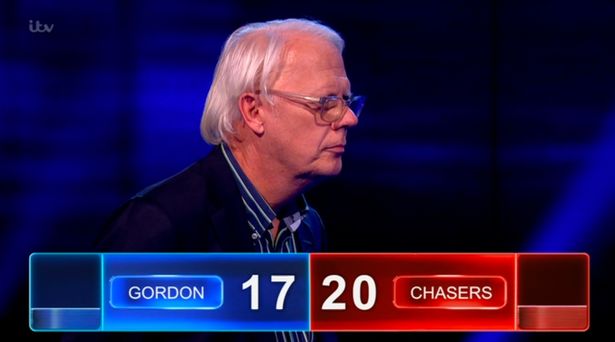 Beat the Chasers fans were left raging at their screens after one contestant lost out on winning £10,000.

The latest episode saw contestant Gordon participate for a chance to win the cash prize, but sadly he didn’t manage to beat the quiz masters.

He lost out with just one second remaining and it left fans devastated for him.

Gordon was up against Paul Sinha, Jenny Ryan and Shaun Wallace.

During the quick fire round, Bradley Walsh asked: “Anne Elliot is the heroine of which Jane Austin novel?”

A third penned: “Paul Never hit the buzzer for one of his answers #BeatTheChasers#fix.”

Another wrote: “Didn’t hear Paul’s buzzer on one of those questions there. Mistake, or editing error?”

Sadly, Gordon went home with nothing, but another contestant named Sed bagged £40,000 during his turn.

*Beat The Chasers continues on ITV on Thursday at 9pm