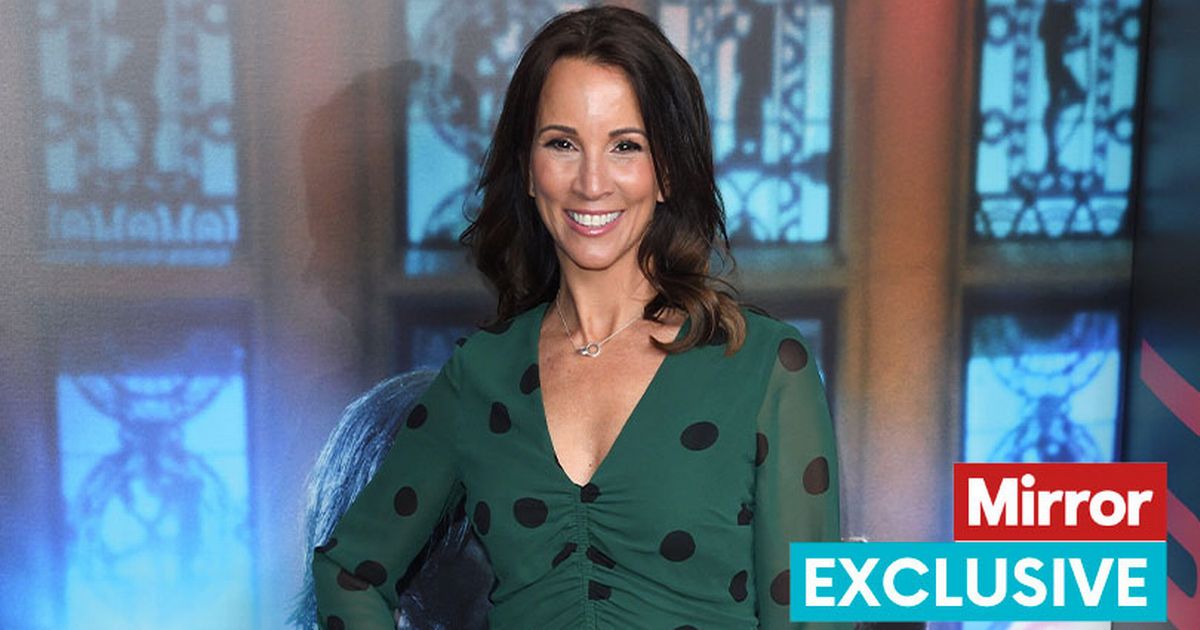 After 13 years on Loose Women, the decision to leave the show was a huge one for Andrea McLean.

Those around her – including her fellow panellists – told her she’d regret it.

But, determined to start a new life, she stuck to her guns and now, two years later, those regrets have failed to materialise. In fact the very opposite.

“I look back really fondly on my time there, and I was so lucky. I had the best job in the world but it just didn’t fit anymore.

“That’s not a bad thing, we all change and you’re not the same person a decade later.

“Most of us will outgrow our jobs at some point.”

She made the decision to step down from the panel to concentrate on a new career as a self-help author and focus on This Girl is On Fire – the brand she runs with her third husband Nick Feeney.

She adds: “Because I was doing This Girl is On Fire on the side it just became clearer that this is what I wanted to be doing.”

And leaving the ITV show has even made her re-think her home life too and there’s a move to Florida in the pipeline, once her children Finlay, 20 and Amy, 15 have flown the nest.

The 52-year-old says: “Moving to Florida is something that won’t happen for a while because of the kids and schooling, but eventually we would like to live there for the winter.

“Our business is online so we can operate from anywhere.

“The way I see it is I’m in my fifties now, I may have only 30 or so winters left so if I can choose to spend them somewhere warm then I definitely will.”

In fact, the star, who shot to fame as a weather presenter on GMTV, says she now even looks back fondly on her time taking part in Celebrity SAS: Who Dares Wins.

Andrea has previously claimed the gruelling experience in 2019 where she was interrogated by Ant Middleton led her to confront traumatic experiences from her past, causing her to have an emotional breakdown.

“I am so glad I did that show – it was the best thing I ever did,” reveals Andrea, who left early after catching hypothermia.

“It was really hard and one of the worst experiences because of that, but I’m happy I did it because it changed the course of my life. I’m so fond of the guys because they did their job.

“They were scary, big men but they were amazing.”

Last week, Andrea released her latest book You Just Need to Believe It, a guide to a 10-day challenge that claims to help people find happiness, break out of their comfort zone and find inner strength.

“This is the first book where I’ve tried and tested it before putting it out, because it’s based on a challenge that I did with my community,” says Andrea.

“I know it works and it’s a really nice feeling. The feedback coming in so far has been beautiful.

“People have already got in touch with me to say they’ve been making changes and it’s wonderful to hear.”

She also reveals that she’s set to take This Girl is On Fire to the next level by launching an app so users around-the-world can access content on the go, such as podcasts and masterclasses.

In June, Andrea and Nick both became certified life coaches, and she says working with her husband on their brand day-to-day is a mix of being “challenging” and “interesting”.

She adds: “It’s all of those words, but it’s also been great.

“When you work on a business you both run, nobody cares about it as much as both of you do so you’re not coming home from work and talking about something and your other half doesn’t care.

“The joy of it is that we think about it 24 hours a day, but that can also be a downside, so for us it’s been really important to try and find moments where we have a day off…which doesn’t always work.”

And while she has recently been doing online presenting work for This Girl is On Fire, on Monday night Andrea will be returning to the stage in front of an audience for the first time since leaving Loose Women when she hosts a variety performance to raise money for Ukraine.

The sold-out Concert for Ukraine will be taking place at Eastbourne’s Royal Hippodrome Theatre, but will also be available for viewers elsewhere in the country to live stream from home this evening.

It is looking to raise funds for UNICEF’s Ukraine Emergency Fund, which is providing families with clean water and food, giving information to people seeking refuge and delivering essential supplies such as medicine.

“Getting involved with hosting the concert was a no-brainer, I said yes before the words were properly out when I was asked,” says Andrea.

“I’ve done some presenting in front of online audiences, but this is going to be the first time standing in front of hundreds of people in real life.

“I’m really excited for it, and not nervous at all because everybody involved has really committed to it being a brilliant night.”

Andrea says that personally she has been giving donations of money and clothes to organisations helping Ukraine, but tonight is an opportunity to help raise thousands of pounds.

Andrea McLean shot to fame as a weather presenter on GMTV
(

She adds: “It was really important to work with a charity such as UNICEF, because they are so experienced.

“You know that this money is going to be put exactly where it needs to be very quickly.”

The show will feature performances from several celebrities from stage and screen, including AJ and Curtis Pritchard, X Factor winner Dalton Harris and former Strictly Come Dancing professional Chloe Hewitt as well as talent from local schools in Eastbourne.

Andrea will be co-hosting the evening with Olympic gold medal-winning figure skater Robin Cousins, and says she’s excited to see him again after he judged her during her Dancing on Ice stint in 2006.

“I hope he’ll remember as it was a long time ago,” says Andrea.

“Robin was an absolute dream on Dancing on Ice, he was so sweet and lovely so I am really looking forward to connecting with him again.”

And despite Andrea’s new career change as a life coach, she says she wouldn’t rule out any other future appearances on reality TV shows if they came up.

“My mindset is if it looks like fun and something I’d enjoy or learn from, then life is too short to take myself seriously,” she says.

“I’ll always give something a go and the great thing about telly is that there’s all kinds of crazy stuff that people can ask you to do.”

You Just Need to Believe It: 10 Ways in 10 Days to Unlock Your Courage and Reclaim Your Power by Andrea McLean
(

And for now, Andrea is also enjoying being in her fifties. “I care less about what people think about me,” she says.

“I spent many years tied up in knots, thinking if I did everything well then everyone would like me.

“But now I realise that is completely irrelevant and it’s made me breathe out and I feel a lot more myself.”

*Concert for Ukraine can be streamed stream.theatre from tonight at 7pm. To donate to the UNICEF appeal separately visit unicef.org.uk/unicef/ukraine

Andrea’s new book You Just Need to Believe It: 10 Ways in 10 Days to Unlock Your Courage and Reclaim Your Power is out now, £12.99