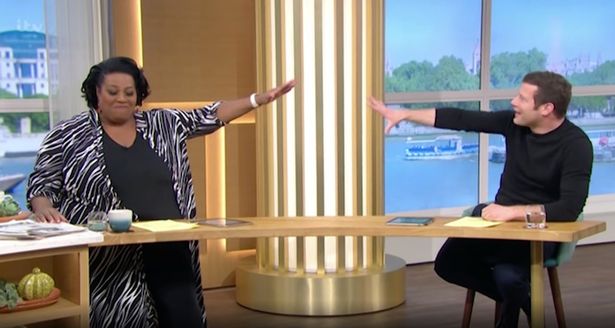 Alison Hammond made a hilarious dig at her This Morning co-host Dermot O’Leary’s expense during Friday’s episode.

The pair were celebrating the news that in just a few days time, people in England will be allowed to hug each other again.

Due to the coronavirus pandemic, restrictions and social distancing has meant people have been advised against close contact, including hugs, with anyone outside of their household.

But as of May 17, Monday, Prime Minister Boris Johnson will lift some restrictions from indoor eating in groups of six, to indoor entertainment venues including cinemas being allowed to open.

People can also hug those outside of their households again from Monday, leaving both hosts thrilled.

As Dermot faked offence, Alison was left in hysterics before joking John Torode was her only pal in the room.

She then put him out of his misery and said: “Joking, you’re gonna get such a good hug, you are gonna get it.”

But moments later Alison was told by producers that hugs wouldn’t be advised at work, meaning the pair probably couldn’t hug it out after all.