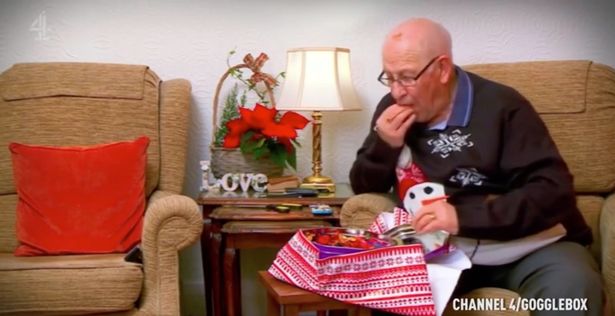 The cheeky Scouser was supposed to be getting a box of chocolates ready to hand over to someone else, but couldn’t resist nabbing a few for himself.

Leon called out to his beloved wife June, who was in the other room, for help as he couldn’t undo the cellotape.

Knowing her husband of 57 years all too well, June asked if he was having any sweets and warned him they were a present.

But the beloved telly star, who was known to have a sweet tooth, couldn’t help put down the cellotape and cheekily tuck into the chocolates on the side.

The hilarious moment was indicative of their loving relationship and how they brought laughter to the show, but it came after a devastating announcement.

“As the first couple to be cast for Gogglebox back in 2013, June and her husband Leon were a huge part of the programme’s success,” it read.

“Their warmth, wit and contrasting personalities endeared them to the nation during the course of the first 10 series.

“Following Leon’s passing in December 2017, June wrote her first book, Leon And June: Our Story, which was a deeply moving and entertaining chronicle of their 60-year love affair.

“A remarkably independent, principled woman with a vivacious sense of humour and a huge passion for life, June will be dearly missed by the entire Gogglebox family, cast and crew.

“Despite her departure from the show in 2017, she remained a passionate supporter of the programme, watching it every week, and she was in regular contact with the production team.”

Everyone at Gogglebox gave their thoughts to June and Leon’s grieving family – Helen and Ian, Julie and Marc, and their beloved grandchildren Frances, Sam and Faye.

Scarlett Moffatt, who also appeared on Gogglebox, took to social media with a snap of June and Leon, writing: “You will be missed by all. Reunited with your true love.

“Sending love to your family and all that knew you and loved you.”

In the following episode of Gogglebox, which aired just hours after the news of June’s death broke, the show paid tribute to another one of it’s most-loved stars.