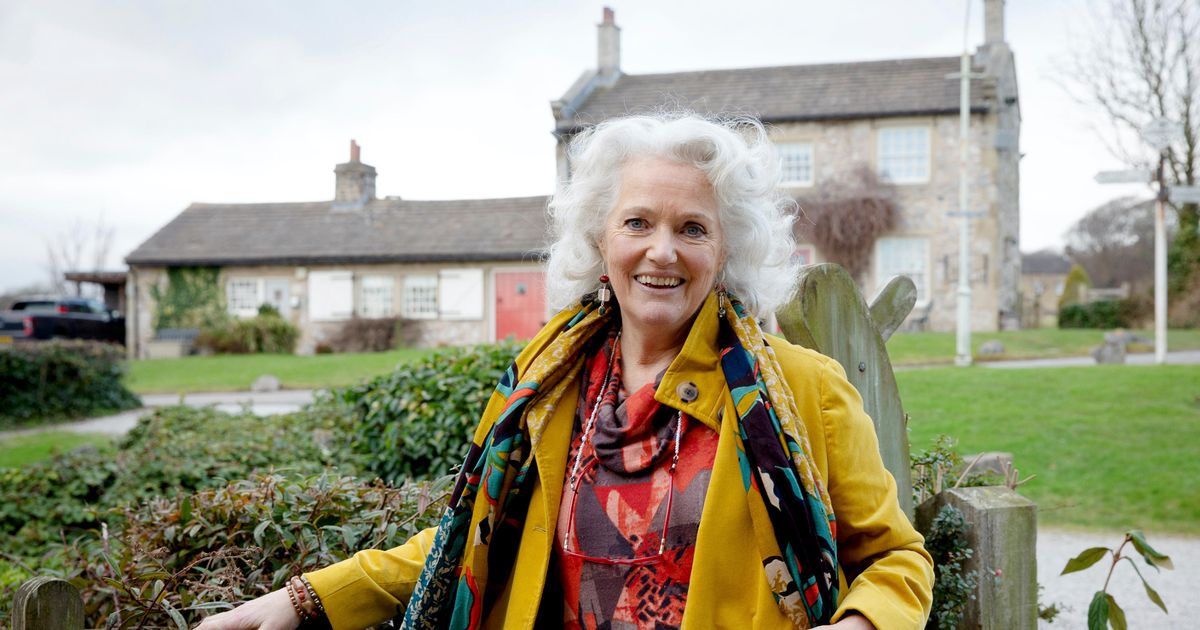 While many actresses of a certain age start dyeing their hair for fear the roles might dry up, Louise Jameson has found the total opposite to be true.

For since deciding to let her locks go naturally white, job offers have flooded in, including one to join Emmerdale.

And she is convinced her embracing the grey helped seal the deal.

“It’s extraordinary, but literally, since I’ve stopped dyeing my hair, there’s been lots of work coming in. I’ve had eight or nine offers,” says Louise.

“I thought it would be the opposite, but no, work’s actually expanded for me. Some actors try to look younger and manage it brilliantly, but I think if there’s an air of desperation about trying to hang on to your youth, then it does limit your casting.

“I’m very happy being 70 and letting my hair go white and not going down the Botox route. I think that age has to be embraced naturally.”

Louise made a drastic hair change to bag her Emmerdale role
(

She recalls: “My dad was an insurance broker and he sold life policies. I can remember him saying, ‘We’ve really got to get you a pension sorted’. And I said, ‘Don’t worry, I’ll be working right up until the day I die’.

“This was way back when I was 20. I never ever anticipated retiring. I write now and direct too, so I’ve got fingers in lots of pies.”

For now, though, Louise is busy playing straight-talking mum Mary, who bursts into Emmerdale unannounced just as daughter Rhona is about to propose to boyfriend Marlon Dingle. With her acerbic wit, it’s not long before Mary is sniping at her.

The fact Mary is fun and feisty, rather than a stereotypical elderly lady, was part of the appeal for Louise.

Louise has become on of the UK’s favourite actresses
(

“Old people shouldn’t always be represented in cardigans and on Zimmer frames,” she says firmly.

“I was going to talk to Emmerdale about it when I went in for the chat. But before I’d drawn breath, they gave me an outline of where she was heading and it stopped me in my tracks. It was better than anything I could have come up with.”

Louise, who grew up in Woodford Green, Essex, has even been left shocked by some of the outrageous things Mary does and says to her long-suffering on-screen daughter.

She says: “As a mum myself I wince at some of the things Mary says. There’s such a fine line between supporting and interfering. With my own two boys [Harry and Tom] I really hope that I tread the line of supporting, but I’ve no doubt if you talked to them, they’d say that I interfered sometimes!”

Louise Jameson in BBC’s Dr Who

Louise has enjoyed a long and varied career, with roles ranging from Blanche Simmons in the acclaimed 80s series Tenko, to the five years she spent in Bergerac as the detective’s girlfriend Susan Young.

The role of Mary is not actually her first appearance in Emmerdale.

She made history 50 years ago playing the show’s first ever murder victim Sharon Crossthwaite, a cousin of Annie Sugden.

Continuing with the theme, she also ended up in a bodybag in Bergerac, suffered a heart attack in EastEnders and died of beriberi, or vitamin B1 deficiency, in Tenko.

“They do keep killing me off, are they trying to tell me something?”
she laughs. “When I was in Emmerdale in the early 1970s, it was one of my first ever jobs.

“So to have been offered this part seems like I’ve come full circle.”

Arguably Louise’s biggest career regret was not being allowed to continue playing EastEnders matriarch Rosa for longer than her two-year stint on the soap.

She says: “It’s a great show with a fantastic cast and I really loved my time there.

“We’d had two years bedding in and we were just about ready to fly, but a new producer came in with different ideas and [the di Marco family] were the casualties.”

But while that part is what she is perhaps most widely recognised for, she remains a favourite with Doctor Who fans for playing Leela, the glamorous warrior companion to Tom Baker’s Fourth Doctor from 1977 to 1978.

“I still receive letters from people who wrote to me in the 1970s,” she smiles. “It’s unbelievable. I do so many Doctor Who conventions I haven’t anything left to sign!

“I also do Doctor Who audio books and I’ve just written a script for them. It’s turned into my pension and it takes me all over the world.”

Louise has dyslexia but fortunately Emmerdale bent over backwards to help her with her filming schedules.

“I had so many emails that I couldn’t work out what I was supposed to be doing on what days,” she explains.

“We’re sent all the information, so it was a case of deciphering which bits were pertinent to me.

“I couldn’t see my way through the maze, but they helped me sort it out.”

The acclaimed actress recently joined the cast of Emmerdale

“I’m quite glad I stopped when I did, because I think otherwise, I would have spent the whole of lockdown under a table!” she laughs.

“It’s not like I drank incredibly heavily, but I would have a glass or
two daily.

“Now when I wake up, I’m awake, I don’t have to spend an hour coming to. I feel so much better for it.”

As for the future, Louise wants to enjoy every second of her time in Emmerdale.

Emmerdale is on weekdays on ITV.

Emmerdale spoilers: Liam and Wendy targeted by vengeful Meena as she frames Manpreet