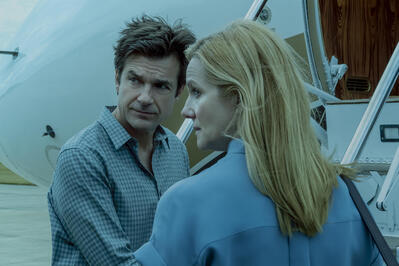 We’re still waiting on a premiere date for the fourth and final season of Ozark, which has us more antsy than watching the pressure cooker that was Season 3. But unfortunately we have to wait ’til who knows when to see the conclusion of Netflix’s tense crime saga. Still, after watching Season 3 of Ozark and seeing Marty Byrde (Jason Bateman) continue to walk a tightrope between staying alive by laundering money for the cartel and getting caught by the cops or killed by hillbillies, we’re looking for more nerve-racking dramas about desperate crooks.

If you’re looking for more shows featuring someone forced into a life of crime, violent battles between drug cartels, or families hiding secrets, we’ve put together a list of seven shows that will tide you over. From the show that paved the way for Ozark to some undiscovered gems that follow the same model, these shows will provide the next best thing.

Watching Ozark without having seen Breaking Bad is like playing with GoBots instead of Transformers. Ozark wouldn’t exist without AMC’s classic crime drama, which is considered by many to be a top 10 series of all time (it’s squarely at No. 1 in my book). The similarities are not coincidental; Bryan Cranston plays a man thrust into the crime game (making and selling meth) under dire circumstances (he has terminal cancer and wants to provide for his family), forming the blueprint on which Ozark was based. But the writing, directing, and acting on Breaking Bad is superior to Ozark, perfecting the high-wire intensity that many shows have since tried to emulate. Cartels, money laundering, a family on the edge, it’s all here in Breaking Bad, and it’s much better.

You know how you watch Ozark, and someone will get grotesquely blown up in an explosion, and then all of a sudden there will be this gorgeous drone shot of the Ozarks, and you think to yourself, maybe I should take the wife and kids down to Missour-uh for a vacation? The series’ stunning scenery is just as engrossing as the crime, and that feeling is also all over Netflix’s Bloodline. In this case, the Florida Keys serve as the picturesque setting that provides cover for corruption and criminality, which only further exposes its characters to the series’ questions of the extents of morality. Like Ozark and Jason Bateman, Bloodline is fronted by one of TV’s great leading men in Kyle Chandler, who plays local detective John Rayburn, a member of a supremely messed-up and powerful family buried in secrets. What begins with family disputes ends up devolving into crime and murder, but it’s the creeping sense of doom in a beautiful place that will most remind you of Ozark.

How to watch: HBO Max

Thanks to Ozark, we learned that Jason Bateman wasn’t just a funny guy saying things like, “Has anyone in this family even seen a chicken?” He showed some serious dramatic chops in Ozark, both in front of the camera as an actor and behind it as a director. Between seasons of Ozark, Bateman starred in and directed this miniseries for HBO, in which Bateman plays a Little League coach accused of murdering a young boy. Given that this is based on a Stephen King book, The Outsider quickly adds supernatural elements to its story, but the moodiness, occasional blue tint, and Bateman’s solid performance are purely Ozarkian.

If it’s more of the ruthless cartel killing in Ozark that you’re after — and who doesn’t love ruthless cartel killing? — then buckle up, because the Narcos franchise on Netflix is loaded with it. The first season of the original Narcos, which debuted in 2015, follows the DEA’s takedown of Pablo Escobar, the infamous Medellín cartel leader and the world’s biggest coke dealer. The series ran three seasons before transitioning over to Narcos: Mexico, which may even be better than the original Narcos and follows the drug trade in Mexico and the Guadalajara cartel. There aren’t any white guys getting over their head in the crime world, unless you count the feds, but all the action, violence, and devious backstabbing you want from Ozark is here.

Ozark is all about keeping things clean and staying ahead of the bad guys. That’s also the gist of Spotless, a hidden gem on Netflix that never got the fanfare it deserved, largely because it debuted in the United States as an Esquire Network — yes, Esquire Network was a thing back in 2015 — original series. The British-France co-production (don’t worry, it’s mostly in English) features a lot of the gory messiness of Ozark thanks to the main character running a crime scene cleaning business in London, and Spotless has no qualms about going into the dirty details of death, including beautifully shot crime scenes. But when his brother comes to town with a dead body in his trunk and a mob boss on his heels, he gets pulled into a world of crime he never expected to be part of. Thankfully his unique talent gets him out of many sticky situations. Spotless is dark and harrowing like Ozark, but adds more black comedy to lighten the mood ever-so-slightly. “You brought weed across the border?” “Well, I thought if they found the dead body they’d let the weed slide.” Spotless was renewed years ago for a second season, which has unfortunately yet to materialize.

How to watch: Amazon Prime

Amazon’s underrated crime series Sneaky Pete follows a man on the run from a crime boss who also has to act normal to pretend like everything is OK. Sound familiar? Giovanni Ribisi plays an ex-con just released from prison who assumes his cellmate’s identity in order to escape his own troubled past. Further complicating things, he reunites with his cellmate’s long lost family and must pretend to be him all while saving his ass from thugs. That puts Ribisi’s character in a constantly tightening vice that he somehow manages to wiggle out of, much like Marty Byrde does about 10 times in every episode of Ozark. Bryan Cranston also appears in and produces Sneaky Pete, as does Margo Martindale, in case you need further endorsement.

How to watch: Hulu

Mennonite cocaine dealers! What more reason do you need to watch this Canadian crime thriller? Another series heavily influenced by Breaking Bad, Pure premiered on WGN America in 2017 before moving over to Hulu and follows a Mennonite pastor in Canada who goes undercover to stop the cocaine trade within his community. Now before you say how ridiculous this is, keep this in mind: It’s based on true events. Like Ozark, it features a man forced into crime who learns on the job and is tempted by the dark side, and Ryan Robbins gives a strong performance as the conflicted pastor. But seriously: Mennonite cocaine dealers! The show aired two six-episode seasons, but it’s unclear if there will be a third.

Looking for more shows based on ones you already love like Vikings, The Office, and Bosch? We’ve got loads of them!