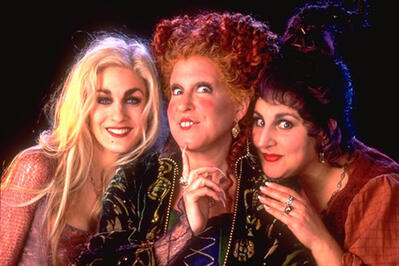 Halloween traditions this year are going to look awfully different than years past. Every costume will need to come with a mask. Trick-or-treating is allowed, but only inside your house and with candy that you’ve handled. Bobbing for apples? Only if you have your own individual bobbing tank. You can’t even TP someone else’s house because you worked so hard to get that toilet paper stash and it would be lunacy to waste it on a prank. The only real Halloween tradition that you can practice is celebrating Halloween by staying inside and watching some Halloween movies with the kiddos.

If you’re looking for a good kids or family-friendly movie to watch for Halloween, we’ve rounded up a list of eight classics and soon-to-be classics to sink your plastic fangs into. From animated goodies like The Nightmare Before Christmas and It’s the Great Pumpkin, Charlie Brown, to nostalgic movies like Halloweentown and Hocus Pocus, here’s where to stream the best family-friendly Halloween movies.

The Nightmare Before Christmas

Tim Burton’s The Nightmare Before Christmas not only saved Hot Topic from bankruptcy but became a classic so big and perfect that it’s mandatory viewing for TWO holidays. The stop-motion animated movie follows the well-intentioned Jack Skellington, the Pumpkin King and master of Halloween, as he oversteps his bounds and tries to take over Christmas by kidnapping Santa Claus and delivering frights to boys and girls. It doesn’t go so well, but everyone learns a lesson. Danny Elfman’s score remains one of the most hummable soundtracks in history.

This Disney Channel Original Movie is pretty terrible (as were all things in the late ’90s), but nostalgia is a heck of a thing, and ’90s kids everywhere will use October as an excuse to sit their own kids in front of the TV to watch the Halloweentown franchise, which consists of four movies: Halloweentown (1998), Halloweentown II: Kalabar’s Revenge (2001), Halloweentown High (2004), and Return to Halloweentown (2006) — all of which are on Disney+. The first film follows a 13-year-old girl who learns her mother and grandmother are witches, and that there’s a secret town where it’s Halloween everyday.

The 1993 Walt Disney Pictures film has become a Halloween staple since its release because, well, there aren’t a ton of Halloween-y films for families that don’t involve talking dogs or that “Hey Vern!” Ernest guy. Bette Midler, Sarah Jessica Parker, and Kathy Najimy star as a trio of witches who are accidentally summoned by some kids snooping around an old abandoned house, and it’s up to the kids and a magical cat to stop the witches from becoming immortal.

Breaking news for 2020: It’s the Great Pumpkin, Charlie Brown is NOT on ABC this year. It’s the first time in over half a century that the network hasn’t carried it, which is another sign that we’re officially in the streaming era and that Apple has some deep, deep pockets. The good news for everyone who still uses an antenna to get TV is that Apple isn’t totally evil, and, according to Vulture, the streamer will make It’s the Great Pumpkin, Charlie Brown available to stream for free from All Hollows’s Eve Eve to the day after Halloween.

Watch it on: HBO Max

Roald Dahl’s children’s classic gets updated by Robert Zemeckis in this new original HBO Max film. The 1983 book gets a change of location (from 1980s England to 1960s Georgia), but the story is similar: A young boy stumbles upon a conference of witches while on vacation with his mom, and he gets turned into a mouse! Anne Hathaway stars as the main witch, and the script was written by Zemeckis, black-ish‘s Kenya Barris, and fantasy guru Guillermo Del Toro. The 1990 version starring Anjelica Huston is on Netflix.

Watch it on: Starz

Monsters don’t always have to be scary, and they shouldn’t be, especially when you’d like your little ones to hit the hay without crawling into your bed at 2 a.m. because of night terrors. For a goofy look at all the stars of “Monster Mash,” this animated film about Dracula (Adam Sandler) running a hotel for creatures does the trick with all the comedy range — potty humor, pratfalls, etc. — that a pre-tween will appreciate. The voice cast also includes Andy Samberg, Selena Gomez, Kevin James, and many more famous people, and it was directed by animation living legend Genndy Tartakovsky.

Watch it on: Freeform

If your family can handle some dark humor about death and some low-medium grade scares, 1988’s Beetlejuice is the perfect spooky film to get into the fun spirit of Halloween. Alec Baldwin and Geena Davis play a couple who die in an accident and become ghosts haunting their house, which is quickly bought up by a new family that includes a young girl (Winona Ryder) who can see them. Their solution to get the family out of the house is to summon an insane ghost (Michael Keaton) who is more than anyone can handle. Directed by Tim Burton, it’s a campy goth masterpiece.

Watch it on: Amazon Prime, Netflix

I saw someone on Twitter recently argue that The Addams Family was the most well-cast movie of all time, and I’m not here to disagree. Raul Julia, Anjelica Huston, Christopher Lloyd, and others round out the cast of this thoroughly enjoyable adaptation of the classic TV sitcom about a monstrous family. If your fingers can stand some more snapping, the sequel, 1993’s Addams Family Values, is streaming on Freeform, Amazon Prime, and CBS All Access. And if you’re looking for the 2019 animated version, it’s on Amazon Prime, Hulu, and Epix.