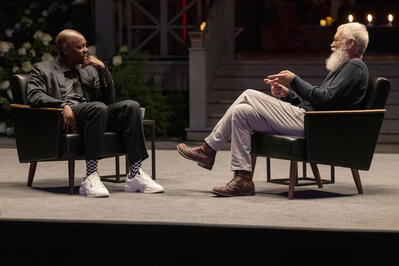 Aside from asking everyone you know what they’re watching, Netflix’s self-reported Top 10 rankings are pretty much the only way to tell how popular a Netflix show or movie is. The list for Thursday, Oct. 22 finds two new titles debuting in the upper reaches of the chart: ill-advised Hitchcock remake Rebecca at No. 3, and the new season of David Letterman’s interview show My Next Guest Needs No Introduction at No. 4. Other than that, Volume 2 of Netflix’s Unsolved Mysteries reboot is still at No. 1, followed by The Haunting of Bly Manor at No. 2, and Emily in Paris rounds out the Top 5.

The popular Netflix continuation of the true crime series returns with more of those grisly details of murder and mystery that you just can’t get enough of. It goes down easy if you like to be creeped out. (Yesterday’s rank: 1)

Season 2 of the moody, emotionally heavy horror anthology (the first was The Haunting of Hill House) is loosely based on Henry James’ The Turn of the Screw. If you don’t go into it expecting a Hill House redux, you won’t be disappointed, because Bly Manor is really good, but it’s different. [TV Guide review] (Yesterday’s rank: 2)

4. My Next Guest Needs No Introduction with David Letterman

Taking off to Paris sounds like a dream given the current circumstances, so watch Emily do it in this romantic comedy about a young Yank who takes a job in the City of Light to lend an American perspective — perhaps too aggressively American — to a French marketing firm. And as one does in Paris, she joneses for some looooove. [TV Guide review / More shows like Emily in Paris] (Yesterday’s rank: 3)

The seventh installment in the unkillable Tremors comedic monster movie franchise is basically a budget Jurassic Park, with raptor-like creatures called “shriekers” picking off people sent to a tropical island to deal with an infestation. Napoleon Dynamite is in it. It’s trash, but it’s fun, self-aware trash. (Yesterday’s rank: 9)

Adam Sandler plays a weird, easily scared guy named Hubie who’s Salem, Mass.’ self-appointed “Halloween monitor,” which means he annoys everyone and everyone ignores him. But then spoOoOky stuff starts happening, and it’s up to Hubie to save Halloween. If you go into it expecting to have a lighthearted good time, you will. [TV Guide review] (Yesterday’s rank: 4)

Grand Army, adapted by playwright Katie Cappiello from her play Slut, follows five youths from different social circles at a Brooklyn high school as they confront racial and social issues, sexuality and sexual assault, and other controversial topics. It doesn’t seem to be performing very well — it was released on Friday and this is the highest it’s been in the Top 10 — so we wouldn’t recommend getting too attached to it. Look what happened to Teenage Bounty Hunters. (Yesterday’s rank: 10)

Following a night to remember at this year’s Emmys, the critics’ comedy darling brings its final season to Netflix, the service it owes for much of its rejuvenated success following a much less-seen run on Pop TV. It’s a busy season, with its characters heading to complete their arcs, but it never loses touch with its warmth. [TV Guide review] (Yesterday’s rank: 5)

The other day I met someone who works for the company that makes Cocomelon, and she gave me some context about how it got so big on YouTube that other companies started licensing it in order to get a piece of the Cocomelon pie. It’s one of those things that if you’re not regularly around little kids, you might not ever hear about it, but if you are, it’s all you hear about. (Yesterday’s rank: 6)