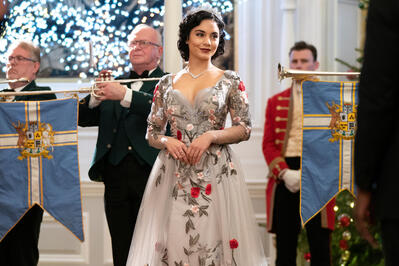 The Netflix Top 10 list won’t tell you how many people are watching a show, but it will tell you which shows people are watching the most. The Top 10 list for Friday, Nov. 20 barely changed from Thursday. The Crown Season 4 is still at No. 1 — it’s one of Netflix’s biggest shows, and it’s probably going to stay in the top spot for a long while — followed by new holiday sequel The Princess Switch: Switched Again, making its debut on the list. The arrival of the trio of Vanessa Hudgenses shifts everything else down exactly one spot from yesterday, with stand-up special Kevin Hart: Zero F**ks Given moving from No. 2 to No. 3 and The Queen’s Gambit moving to No. 4. There’s a lot of royalty in the Top 5.

The ambitious, decades-spanning drama series about Queen Elizabeth II is back for its second season with Olivia Colman in the lead and its fourth season overall, and it adds two pivotally important characters into the mix: Margaret Thatcher (the great Gillian Anderson) and Princess Diana (Emma Corrin), who both clash with the Queen. Their addition breathes fresh life into the series, which remains one of the grandest on all of television. (Yesterday’s rank: 1)

Yet another holiday romantic comedy. The identical Princess Margaret and once a baker, now also a princess Stacy (both Vanessa Hudgens) switch again so Margaret can try to repair her relationship with Stacy’s friend Kevin (Nick Sagar) before her coronation. But Margaret’s identical cousin Lady Fiona (you guessed it, Vanessa Hudgens) has her own scheme to do another switch and take the throne for herself. It’s a whole lotta Hudgens. These movies are very dumb, but they’re fun. (Yesterday’s rank: 1)

Kevin Hart filmed his latest special in his own living room during the pandemic. Netflix built him a stage, and a masked and distanced audience came over to watch him tell jokes in his very fancy pajamas. His living room is big enough to accommodate a comedy show. He has a very unusual life, and that’s what this special is about. (Yesterday’s rank: 2)

Budding superstar Anya Taylor-Joy (she’s been cast as young Furiosa in the next Mad Max movie) stars in this literary adaptation as Beth Harmon, a brilliant but troubled chess champion in 1950s Kentucky. She was an orphan who, in her youth, developed an incredible skill for the game but also a debilitating addiction to pills, which quiet her obsessive mind. It’s a detailed character study of brilliance and madness that’s usually reserved for male characters. It comes from one of Netflix’s go-to limited series producers, Godless‘ Scott Frank. (Yesterday’s rank: 3)

5. Cloudy With a Chance of Meatballs 2

The Cloudy With a Chance of Meatballs mythology is too complicated to just jump in and watch this without watching the first one. You won’t understand about how food falls from the sky because of…science. I’m just kidding, this movie is fun for the whole family, no explanation required. (Yesterday’s rank: 4)

6. Boss Baby: Back in Business

The Boss Baby is the CEO of the baby corporation now, and he’s competing with another baby firm. Capitalism! (Yesterday’s rank: 5)

For fans of: Reality competition shows | Is it good?: Good enough to be on TV for 20 years

There are currently two seasons of Survivor on Netflix, Cagayan (Season 28) and Heroes & Villains (Season 20), both of which are considered to be among the very best of the pioneering reality show’s 40 seasons. So if you’ve never watched Jeff Probst’s show, these could be the ones to get you into it. (Yesterday’s rank: 6)

For fans of: Singalongs, nursery rhymes | Is it good?: Little kids are in love with the Coco

Cocomelon, a multiplatform kids’ TV phenomenon, is consistently in the Netflix Top 10 as it adds new content constantly. Preschoolers can’t get enough of it, and parents hear the songs in their sleep. (Yesterday’s rank: 7)

Benedict Cumberbatch voices Dr. Seuss’ iconic green guy who learns to love Christmas. You know the story, and this CG adaptation doesn’t add much to it. But it doesn’t detract anything from it, either. It’s better than the Jim Carrey version, but not as good as the original version. (Yesterday’s rank: 8)

Legendary toymaker Jeronicus Jangle (Forest Whitaker) loses everything after he’s betrayed by his friend (Keegan-Michael Key), who steals his most prized creation. Jangle’s granddaughter (Madalen Mills), with the help of a long-forgotten invention, sets out on a holiday adventure to get it back. There’s music, dancing, about a million celebrity cameos, and a whole lot of Christmas spirit, if that’s what you’re in the market for. (Yesterday’s rank: 9)