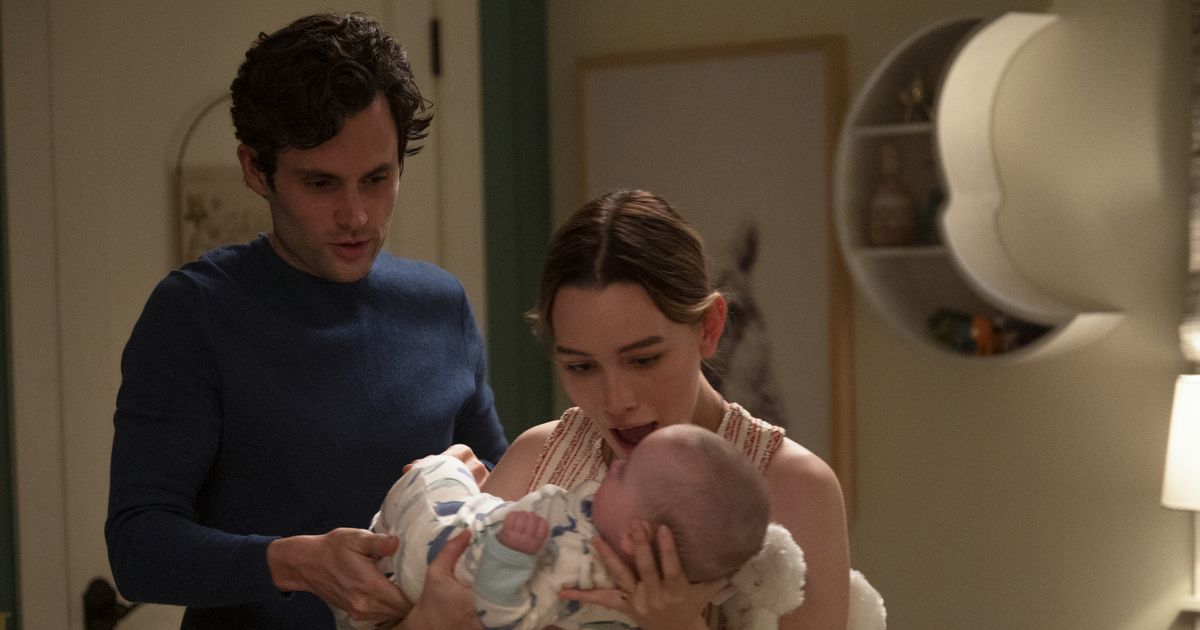 Netflix thriller You has proved just as big a hit with its third series, as murderous obsessive Joe Goldberg moves to the suburbs to raise his son with his wife Love Quinn – who turned out to be just as bloodthirsty as him.

But there’s some fascinating facts from behind the scenes that fans of the show might not know – and it completely changes how you watch it.

From awkwardness in intimate scenes and actors nearly playing different roles, the show may look seamless but the cast have revealed some titbits of information that reveal it wasn’t so easy to create.

And one on-screen couple who had incredible chemistry are now said to be dating – making their steamy scenes together even more interesting to watch.

***Warning – the below contains You spoilers***

Love and Theo embark on an illicit affair, and they had intense on-screen chemistry.

But it’s now been reported there was good reason for that – they are actually dating in real life.

Journal has appeared to confirm their relationship went beyond the script, though neither party has confirmed or denied the rumour.

“Sources are claiming that Victoria Pedretti and Dylan Arnold are dating!” wrote the publication.

True or not – fans have been driven wild by the claims.

One tweeted: “Absolutely thrilled to find out Victoria Pedretti and Dylan Arnold are dating. Ugh what a hot couple.”

Another added: “Not surprised they had tons of chemistry in S3 together. Yeah that’s called good acting but still they had a certain something you know.”

Their romance in You is a rather shocking one due to their age gap – Theo is 19 and Love is thought to be in her early 30s.

But in real life, their age gap is actually much smaller, and the other way around – Victoria is 26 and Dylan is 27.

Dylan Arnold auditioned to play Joe and Forty, before he landed the role of Theo
(

Viewers likely couldn’t imagine Dylan as any other character than the emotional and lovelorn Theo.

But he actually auditioned for two different characters before he landed his eventual part.

He initially auditioned to play Joe, but that went to Penn.

Ahead of series two, he auditioned to play Forty Quinn, and didn’t land that either.

But he got his big break in series three with the role of Theo.

“My relationship with the show goes way back,” Dylan told Teen Vogue.

“I actually went to college with Elizabeth Lail, who played Guinevere Beck in the first season.

“So I’d seen the first few episodes, but it wasn’t until I got the audition for the third season that I went back and was like okay, let me watch the second season and get the tone of the show.”

Meanwhile, Victoria actually auditioned for the role of Guinevere Beck in series one, but lost out to Elizabeth.

Joe’s new obsession is his boss at the library, Marienne Bellamy, who is played by Tati Gabrielle.

But Tati almost turned the offer down for the hit show because she didn’t have enough information.

Her agent wasn’t allowed to reveal to her what the project was, and she was keen to take a break between acting jobs.

“In September or October of last year I was in Spain shooting another project,” Tati told Marie Claire.

“I had fully intended, once I finished that project, to take a month off. But my agent said, ‘They want you for this Greg Berlanti project.’ I asked, ‘What is it?’ They couldn’t tell me, so I said no.”

The agent finally got back to her and said the producers of the mystery show wanted her to do a chemistry reading with Penn – and this gave the game away.

“Then I knew what it was. I said yes because I was a super big fan of the show,” said Tati.

The dead bodies are incredibly accurate and even feel real
(

Victoria has admitted the fake blood used in some of the gory scenes is made of a bizarre substance, and it’s not very high tech, either.

Sticky sugar and red dye is mixed together to create the horrifyingly realistic blood we see on our screens every time Joe and Love go on a killing rampage.

And it gets squirted out of a “blood machine” for some of the really graphic scenes.

In one gory episode, Joe gets his finger cut off by debt collector Jasper.

For anyone wondering how they filmed it, Joe actually wore a prosthetic arm.

Prosthetics are widely used in the show, especially for the dead bodies.

In the scene where Joe puts the body though the mincer, a hyper-realistic fake body was used, and it even felt real.

“It was a headless body that was extremely realistic to touch and sight. All of the body hair, each hair, was a real human hair that was applied individually.

“So the amount of human labour that went into this body was pretty great. It was rigged so that it would bleed when you cut into it. There was also a removable arm.”

The show was originally cancelled

The show was originally broadcast on Lifetime but was cancelled
(

You was originally a show on a different channel – Lifetime – but it was cancelled after just one series.

Netflix then jumped in and bought the rights to the show, and they have had immense success with streaming it.

A clue to the fact it wasn’t always Netflix’s show is the fact the first episode is called ‘Pilot’.

Netflix doesn’t do pilot episodes of its shows.

Penn Badgley nearly turned down the role of Joe

Penn almost turned down the role of serial killer Joe, because Joe is such an awful person, and Penn felt “conflicted” that the show would be problematic.

“I didn’t want to do it — it was too much. I was conflicted with the nature of the role. If this is a love story, what is it saying?” he told Entertainment Weekly.

“And then what was key in me wanting to jump on board were my conversations with Greg Berlanti and Sera Gamble, the creators, and understanding Joe’s humanity.

“I knew that I would be conflicted about the role from day one till the last day, and that is why they thought I would be good for it, is that I’m not psyched to play somebody of this nature.”

The sex scenes were awkward

Penn and Victoria had spent a long time apart, and said their rapport didn’t immediately return in time for their sex scenes
(

There was a long gap between filming series two and three, because the pandemic halted any work on the show.

And when the actors returned, it wasn’t easy to rediscover their chemistry instantly.

Victoria admitted she and Penn felt a little awkward around each other at first, but had to jump in the deep end with intimate scenes.

“It’s weird. We have a rapport. We played a couple before, but it didn’t just immediately come back after being in a global pandemic,” she said.

Penn agreed: “It’s really true, the implications of all that stuff was really felt.”

The pandemic also meant a lot of scenes were rewritten in a bid to include fewer actors.

“There were significant rewrites throughout the whole season to try and negotiate around these scenes that would require a lot of people,” said Penn.

Meanwhile, Tati’s sex scene with Penn was the first one she’d ever done – and she was terrified.

She told Page Six she “freaked out” at first.

A TikTok has recently been going viral as Netflix released a hilariously awkward clip of what the scenes sound like without Joe’s inner monologue telling us his thoughts.

The weird silence before Joe responds to characters, if he does at all, prove just how odd the obsessive killer actually is.

And some fans pointed out it must be strange for the actors to fill the long silent gaps.

But it turns out they don’t – someone else reads out Joe’s narration so they have some context as to what the scene will really be like when it airs.

“It’s really strange. To be honest, it’s very technical. It’s not like normal acting at all,” Penn told BuzzFeed.

When she first got the part of Love, Victoria was told she wouldn’t stay longer than two series – and assumed the character would be killed off.

“I knew I wasn’t going to be on the show past two seasons, so I assumed that she would die,” Victoria told TVLine.

The writers reportedly considered writing her off in other ways, before deciding her death was the best way.

But other than that, most of the cast members were surprised by the twists and turns the plot took, because they didn’t get to read the whole script beforehand.

“I wish we got all the scripts at once so I’d have known,” said Shalita Grant, who played Sherry Conrad.