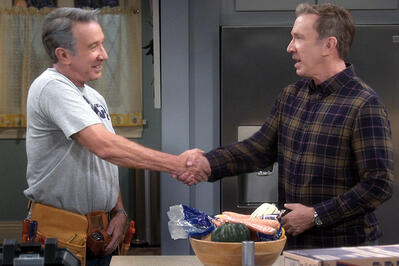 Get your tool belts and power drills out because it is officially Tool Time on Last Man Standing! The Fox sitcom has had appearances from many Home Improvement alumni, including Jonathan Taylor Thomas and Patricia Richardson, but in Thursday’s episode, Tim “The Tool Man” Taylor shows up at the Baxter residence, and TV Guide has an exclusive sneak peek at your double dose of Tim Allen.

When Mike (Allen) gets back from a long day of work and vlog planning, he’s annoyed to find that the handyman has parked in the middle of the driveway. Vanessa (Nancy Travis) ignores his complaining because she’s anxious to see his reaction when he actually lays eyes on Tim, who is hanging out in the kitchen in his usual Binford Tools t-shirt.

If you listen carefully, you can hear Tim’s signature lilt in his voice when he turns around and both he and Mike realize there is a striking resemblance happening. Can Vanessa handle two of these guys in the same room? And more importantly, how long will it take before Tim gets himself sent to the ER?