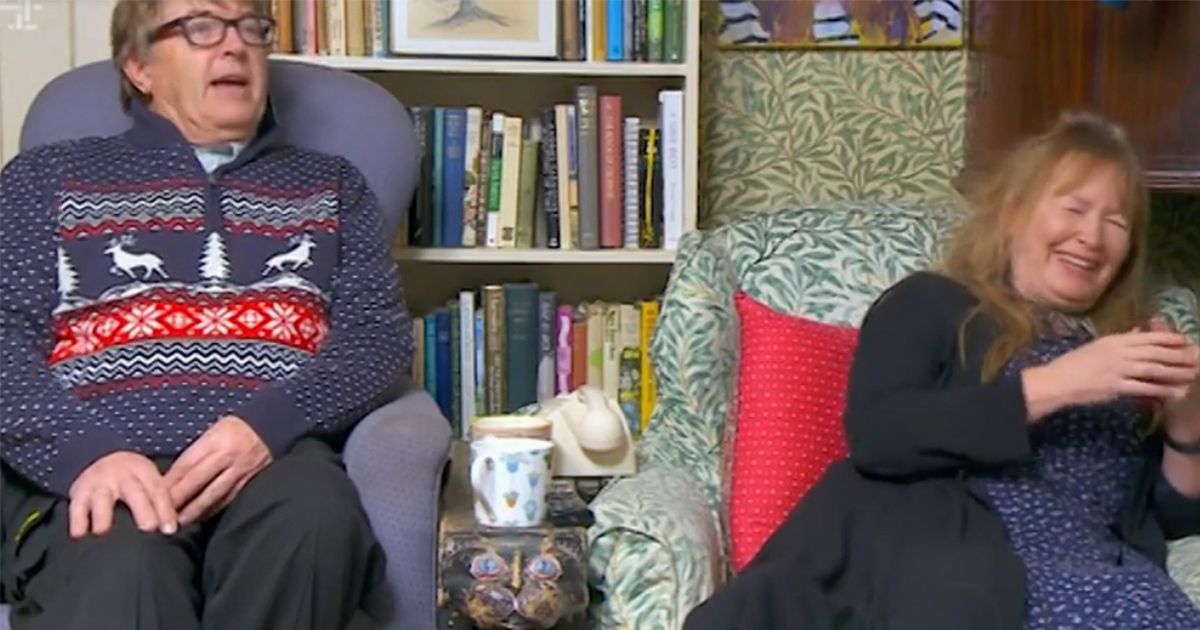 Gogglebox: Mary says she’s ‘not talking’ to Giles in May

Gogglebox fans are “disgusted” after seeing the condition Giles Wood and Mary Killen keep their chair in.

The husband and wife duo were back on screen Friday night at 9pm, along other TV watching favourites.

While the cast tucked into the Strictly Come Dancing quarter final and Channel 4 ‘s OnlyFans documentary, viewers couldn’t look away from Giles’ chair.

Viewers took to Twitter to express their concern, with one addressing Channel 4 themselves to replace it.

While another had suggestions for what Giles should want for Christmas, penning: “Hope Giles gets a new arm chair for Christmas tbh #Gogglebox”.

“Can someone send Giles and Mary some chair cleaner. They look gross #gogglebox,” another chimed in.

This isn’t the first time the Gogglebox star has came under fire over the condition of his dirty looking armchair, with one viewer referring back to a previous series saying: “Was really hoping Giles might have cleaned his chair before the new series but it seems my hopes are dashed. #Gogglebox.”

Back in March, one fan went so far to suggest that the conditions of the blue armchair could be the cause of a future health crisis – saying: “Genuinely concerned that the next global pandemic might be started by Giles’ armchair.”

Although Giles seems to be in no rush to replace his chair, he recently made headlines as fans discovered his lucrative second job.

He stunned fans with his artwork, with the talented artist selling prints of his oil paintings for £250 a piece.

While Giles indulges his creativity with a paintbrush, his wife Mary has taken on the responsibility of handling his commissions and website.

Previously Giles has covered his chair with a blanket

Speaking about his work on his website, Giles said: “I like the contemplative aspect — sitting for several days in a room, watching the light change. There are as many changes as with a landscape.

“I always work in oils as they give more depth. The finished painting should offer an insight into the painter as well as the subject.”

While limited edition giclée prints of Giles’ artwork goes for £250 a painting, which includes the frame, postage and a signature, he has indulged in different mediums.

Giles and Mary both have careers outside of their Gogglebox appearances
(

He has a series of pen and ink drawings, from a collection known as The Diary of Two Nobodies, which he sells at £150 an unframed print in a limited edition collection.

However when it’s an original piece and not part of a printed collection, Giles can bring in a much bigger sum.

Unframed watercolour paintings are listed on his site for as much as £1000, with all listings directing potential buyers to reach out to Mary via email.