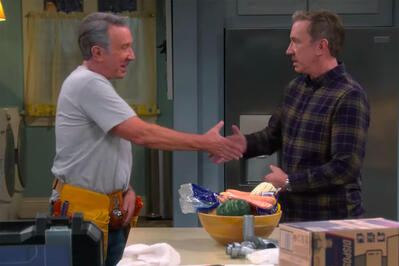 While it’s not exactly an MCU crossover, worlds are about to collide on network television. Tim Allen will reprise his role as Home Improvement‘s Tim “The Tool Man” Taylor in an episode of Last Man Standing — and yes, Tim Taylor will shake hands with Allen’s Last Man Standing character, Mike Baxter. Past will meet present when the Fox comedy returns for its ninth and final season in January.

Fox revealed a first look at the crossover in a preview for the final season, which shows Tim in a familiar Binford Tools shirt. He also shows off his signature grunts for Mike — who isn’t a big fan.

The jokes about Allen’s famous roles don’t stop there. Elsewhere in the preview, when Mike grows a beard, he comments, “I could play Santa.”

The episode featuring Tim Taylor is titled “Dual Time.” The logline teases, “The Baxters see double when Vanessa hires a home improvement repairman who bears an uncannily resemblance to Mike, who is struggling with an idea for his Outdoor Man 10th Anniversary vlog.” Mentally, we’re adding “wacky hijinks ensue” after that description. Will there be a manly men competition involving tools?