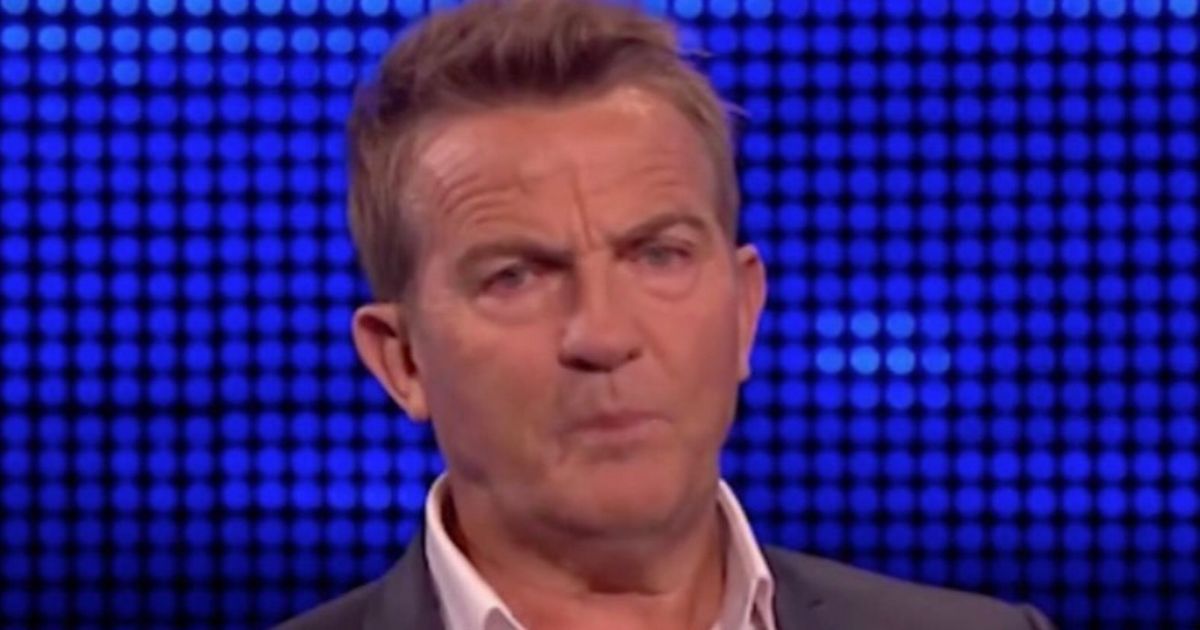 The Chase: Bradley tells Lucy Porter off for ‘trying to run show’ in 2017

Bradley Walsh suffered no fools on a recently aired celebrity edition of The Chase – dragging one star off stage for a “talking to” in a hilarious skit.

The ITV presenter jokingly dragged actress Lucy Porter off the quiz show at one point on Friday’s offering of the hit programme.

The 48-year-old star was competing to win money for charity when she got a little trigger happy with the buzzer during the star-studded episode.

The mum-of-two irritated The Chase host by constantly hitting her buzzer before the 61-year-old presenter could finish reading out all the options to the multiple choice questions.

In the repeated episode from 2017, Bradley asked the famous faces: “Picasso at the Lapin Agile’ is an award winning play by which actor comedian?”

Lucy Porter appeared on the celebrity special back in 2017

The BBC Radio 4 star opted for Steve Martin, saying: “It is the only man I love more than you.

“I have gone with Steve Martin.”

“Did you press that button?” The Chase presenter asked.

“I tell you something now, I don’t care how much you love him more than me, you cannot press the button until I’ve finished reading the question.”

Host Bradley Walsh was not impressed with the contestant’s antics

As the audience roared with laughter, Bradley warned: “Don’t come and try and run the show, we are going to fall out my dear.”

“I’m the one who says what you put, you don’t press the button before I have finished the question.”

At one point, the much-loved host took the celebrity contestant off stage for a telling off.

The Chase star pulled the comedian for a telling off

Viewers were left delighted after the star-studded team managed to get past Anne Hegerty during the Final Chase of the episode and secure a massive £150k plus jackpot.

The celebrity specials also saw Gavin and Stacey star Mathew Horne leave Bradley stunned when he requested a different question while competing to win some funds for charity.

“What was the first London team to win the League and Cup double?” Bradley asked the Nottinghamshire-born star.

With Arsenal, Tottenham Hotspur and Chelsea flashing up as the potential answers, the Bad Education star plumped for Chelsea as his pick.

However, in the episode which originally aired in December 2017, it was revealed that the correct answer was in fact Tottenham Hotspur.

“Who do you support?” Bradley asked the football fan.

A bit embarrassed, he admitted: “Tottenham.”

To try and excuse his blunder, he complained: “It doesn’t say Premiership.”

Bradley hit back with: “Well, that wasn’t the Premiership then, it was just like the FA league you know?”

“Well, that could have been clearer,” Mathew said in reply.

“In fact, I think we should go again – I think I should get another one, because it’s not clear that, is it?” he continued, as the audience giggled.

ITV The Chase continues to air each and every weekday from 5pm on ITV 1 and also the ITV Hub with episodes also available to catch up with afterwards.