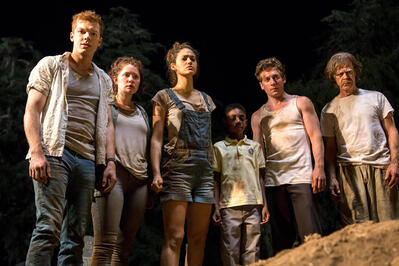 ‘Tis the season for free content. To celebrate the holidays, Showtime is making a number of its shows and films available to view for free on streaming platforms and on demand. The list is a mix of old favorites (if you want to revisit Ray Donovan Season 1, now’s your chance!) and new hits, like the premiere episode of true crime series Love Fraud. Most are already available, but on Dec. 6, they’re adding the premiere of Shameless Season 11 — the final season — as well as the premiere of Bryan Cranston’s TV comeback, Your Honor. All free Showtime content is available until Jan. 11 on YouTube and Sho.com, as well as across Showtime partner platforms.

If the shows you sample get you hooked, new subscribers who sign up for Showtime before Jan. 11 will receive a 30-day free trial and lock in a lifetime price of $8.99 per month. The offer is available at Showtime.com, as well as through select platforms that feature the Showtime standalone app.

But which of the shows and films available for free are worth your precious holiday time? If you’re having trouble deciding what to stream, we’ve recommended six of the best things to check out from Showtime’s free offerings. Head below for the full list of everything available.

One of the best and most underrated queer shows on TV right now, Work in Progress is the semi-autobiographical story of Abby (played by series co-creator Abby McEneny), a self-described “fat, queer dyke” living with depression and OCD who finds a new lease on life as she starts a relationship with a cute young trans man, Chris (Theo Germaine). It’s a radical exploration of issues like sexuality, mental illness, and body image, which might not sound that funny, but Work in Progress is absolutely hilarious. It’s even got Weird Al. The series has been renewed for Season 2.

Spend the holidays with TV’s late night kings. On top of having the best kicks on television, Desus Nice and The Kid Mero have their fingers on the pulse; they know what people actually want from late night talk shows. (Who else could book Lil Nas X’s first TV performance of “Old Town Road”?) Their Showtime series is effortlessly cool, very funny, and always well informed. They’re also the only late night hosts who consistently bring out something new in their guests, like that time they solved an escape room with Elizabeth Warren.

Lauren Greenfield’s shrewd documentary The Kingmaker follows the political career of Imelda Marcos, the extravagant former first lady of the Philippines. She was famous for leaving behind thousands of pairs of shoes when her family fled into exile in 1986. The film might seem like a chance to gawk at her obscene wealth, but it evolves into a terrifyingly relevant tale about corruption and privilege, as Imelda works to rehabilitate the family image and regain power.

City on a Hill

Kevin Bacon is having a blast on City on a Hill, tearing into his role as your basic premium cable antihero. Bacon plays a racist, sexist, crooked FBI agent in early-’90s Boston (yes, Matt Damon and Ben Affleck produce) who forges an unlikely alliance with an assistant district attorney (Aldis Hodge) who’s trying to crack down on rule-breaking cops. It isn’t wicked original, but why mess with the classics? The series has been renewed for Season 2.

If you’re still thinking about The Jinx, don’t sleep on Love Fraud, a true crime docuseries that takes the horrors of online dating to new levels. Directed by Jesus Camp‘s Heidi Ewing and Rachel Grady, the four-part series focuses on a number of women who were conned by a man they met online, Richard Scott Smith — and those women want revenge. The finale is when it becomes truly Jinx-ian, but the whole series is a wild, and yet refreshingly not exploitative, ride.

This funny, low-key comedy stars Fred Armisen, John C. Reilly, and Tim Heidecker as a trio of inept astronauts working in a NASA training facility with the hopes of qualifying for a trip to the moon. The stakes are literally astronomical, and they couldn’t be less prepared. Out of all the space comedies to premiere this year — and there were a lot of them — Moonbase 8 has the most potential to really take off.

Check out the full list of Showtime shows available to stream for free.

These shows will be available until Jan. 11, 2021. All are available as of Friday, Dec. 4 unless otherwise noted.