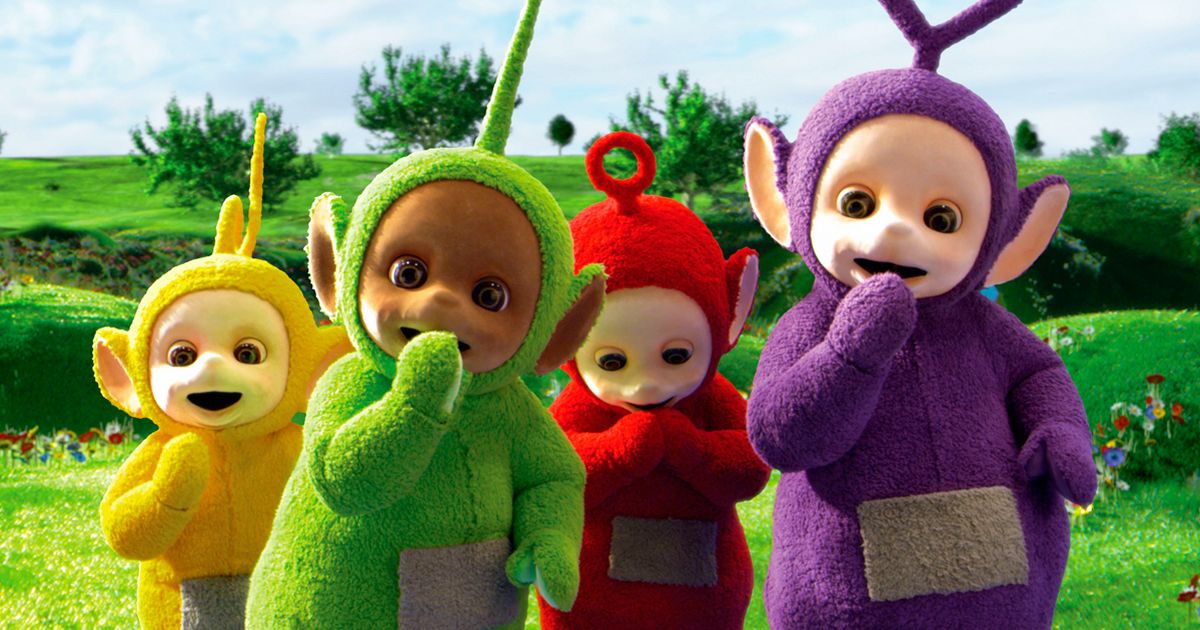 The hugely successful childrens’ TV show Teletubbies first aired on 31 March 1997, and has delighted more than 1 billion children worldwide, and the four colourful aliens have even won two BAFTAs

The Teletubbies may be one of the most successful kids’ TV shows, but shocking scandals have spanned the history of the four colourful aliens – Tinky Winky, Dipsy, Laa-Laa and Po.

The quartet first hit our screens on 31 March 1997, and bowled over young viewers with their gibberish language, television screens on their stomach, and unique antenna coming out of their heads, which helped to identify them.

Since Teletubbies premiered 25 years ago, it has entertained more than 1 billion children worldwide, and delighted generations of kids who have been entranced by the four colourful characters who live in Tubbyland with their vacuum cleaner Noo-Noo, eat Tubby Custard and Tubby Toast, and are watched over by a cute Sun Baby.

The show has been entertaining generations of kids since 1997

The show has been translated into 45 different languages, and has won numerous awards, including two BAFTAs, and 42 Teletubbies toys are sold every minute. .

But behind-the-scenes, dark secrets lingered which marred the show’s innocence, with tales of actors being fired from the show, as well as a tragic death.

Here, we take a look at what happened to the actors who played the original Teletubbies…

Tinky Winky was the most controversial of the Teletubbies
(

The largest – and seemingly oldest Teletubby – was the purple-coloured Tinky Winky, who sadly caused the most controversy during his tenure on the kids’ TV show.

Some disgruntled viewers claimed the character was gay, as he carried a red handbag, with a US evangelist warning parents that the loveable purple alien was “the gay pride colour”, while his triangle antenna was the “gay pride symbol”.

Original Tinky Winky actor Dave Thompson left the show after the first few episodes following “creative differences”, and it was later reported that the show’s production company had “implied” the character was gay.

Dave said he was “proud” of his time in the role, and went on to have a successful comedy career.

He was replaced by Simon Shelton, who was a trained ballet dancer and choreographer.

Simon said he received fan mail from kids and parents, and said the speculation surrounding Tinky Winky’s sexual orientation was “really quite silly”.

Sadly, he died from hypothermia in January 2018 at the age of just 52.

Dipsy was the second oldest Teletubby

The bright green Teletuubby was a firm favourite with young viewers, and was played by comedian John Simmit, who said his performance was influenced by a reggae track.

“Dipsy would say, ‘Papa Come Papa Come To Po’, which was actually my take on a classic reggae rhythm track called The Whip,” he explained.

“And I’d slip in Jamaican dance moves, a Bogle there and a Tatty here. People spotted my little wink to my culture and I’m proud of that,” he shared.

John Simmit was the man behind Dipsy
(

John also said wearing the heavy costumes for hours on end was an unpleasant experience, and had to wear special underwear to absorb all the sweat.

“When we were out of costume, you’d have to turn your face the other way and speak to us at a distance because we were reeking and so sweaty you could wring us out. Huge props to our dressers for putting up with us!” he joked.

Laa-Laa was one of the most beloved of the Teletubbies

The yellow alien with the curly antenna is the loveable Laa-Laa, the second youngest of the Teletubbies.

The character was played by trained dancer Nikky Smedley, who landed the role after replying to a newspaper ad asking for actors to star in a new kids’ TV show.

She was one of the original actors to stay in the role for the first four-year run of the show.

Nikky previously explained that the hot and heavy suits were a nightmare, as they had to be inside them for up to 11 hours a day.

She left the show and began working for Ragdoll Productions, and was involved in choreographing other hit kids’ shows including In The Night Garden.

The baby of the Teletubbies family was the red alien Po, who was best known for her circular-shaped antenna, and her love for bubbles and her prized possession – her scooter.

Actress Pui Fan Lee landed the role of Po shortly after leaving drama school, and she was the star of the iconic picture taken during a break in filming, showing her laid down on the fake grass while still dressed as her character.

Pui was a successful actress as well as having an alter-ego where she dressed up as a Teletubby, and hit the headlines when she starred in lesbian sex scenes for the Channel 4 show Metrosexuality.

Po is the cutest – and youngest – member of the alien crew

“Yes, I was Po, but I am an actress, and the role looked interesting. I didn’t take the lesbian role to be deliberately controversial,” she explained.

Pui returned to kids’ TV and was one of the presenters of the much-loved CBeebies series Sow Me, Show Me, alongside Chris Jarvis.

She also had a small role in Bridget Jones: The Edge of Reason in 2004, as well as 28 Weeks Later, where she played a zombie called Helen.

Pui also played Dr. Fremantle in EastEnders in 2019, and her scenes involved the autism diagnosis of Mick and Linda Carter’s son Ollie.

The original Sun Baby was played by Jess Smith, who was hired by producers after she was being weighed in hospital.

The adorable tot would pop up at the beginning of every episode to wake the Teletubbies up, and would also appear at the end to mark sundown.

She revealed that to make her laugh and squeal, her dad was in front of her playing with toys, while she was being filmed.

Coronation Street favourite unrecognisable dressed as Po from the Teletubbies