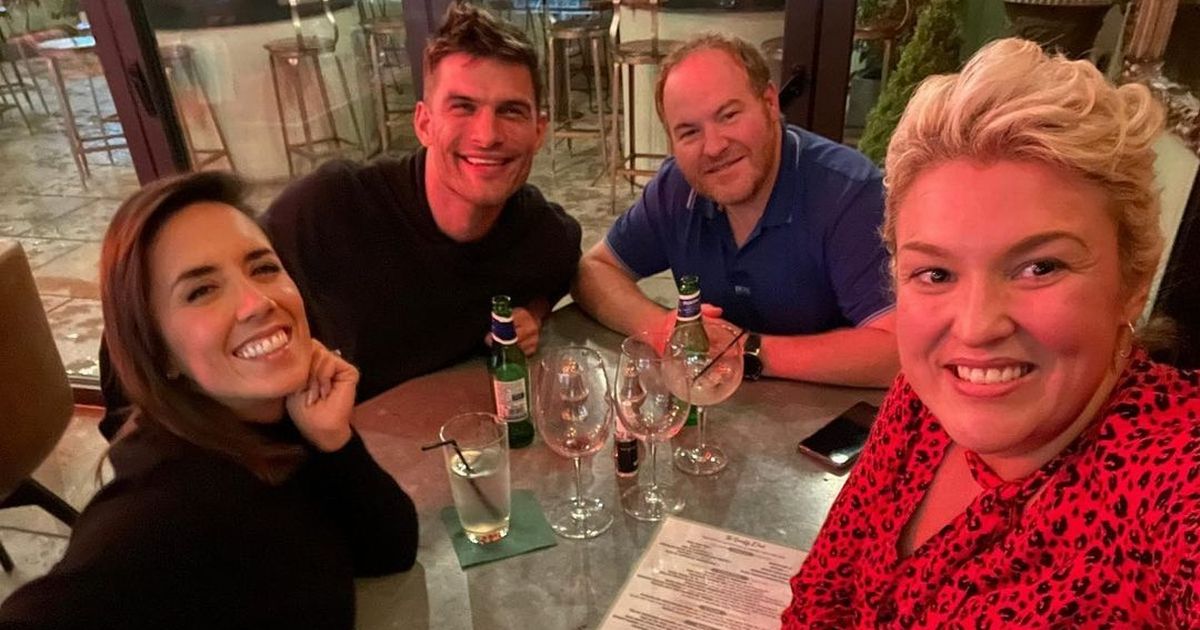 If anyone is having a whale of a time on Strictly Come Dancing, it’s Sara Davies.

The Dragon’s Den star is paired with professional Aljaž Škorjanec and they have hit it off in a big way, with the Slovenian dancer even moving up to the North East to be closer to Sara.

She and Aljaž meet every morning at 6am for training, allowing Sara to still focus on her company, Crafter’s Companion, and family life.

And Aljaž has fitted into 37-year-old Sara’s family perfectly, she told Teesside Live, with her sons calling him their “new best friend”.

“At first the kids saw Strictly as taking me away from home but Aljaž said to me ‘what can I do to help?’ We start early, 6am meet and train so we don’t have to compromise,” said Sara.

“The kids now think it is awesome, they’ve got a new friend. One of the kids wanted to re-watch the launch show at 5.30am the other morning so they could watch Aljaž. He had his hair slicked back on Saturday night and they wanted the same style – it melts my heart.

“He has embraced my family life, he gets on with my husband like a house on fire. I feel like I’m having my cake and eating it, I’m living my best life.”

Meanwhile, Aljaž is settling into life in the North East well, revealing it actually reminds him of his home community back in Slovenia because everyone is so supportive of their neighbours there, too.

But it hasn’t all been completely wholesome in their new setup, as Sara guiltily explained on Loose Women.

She and Aljaž appeared on the show via video link, and were forced to explain themselves as a picture of Sara, her husband Simon, Aljaž, and his wife Janette Manrara, who hosts It Takes Two, flashed up on the screen looking very merry.

“Last night I had these two – Janette and Aljaž – round for dinner at our house,” said Sara.

“We had way too many shots of coffee Patron,” she continued, as she pointed at Aljaž, telling him: “That’s your bad influence there!”

“But, we had such a laugh -do you know what – Janette is an absolute firecracker! Her and my husband have hit it off as well, so it’s been brilliant spending time the four of us,” she beamed.

As well as their blossoming friendship, Sara and Aljaž have been vastly improving their scores on the Strictly leaderboard after a disastrous start in week one when they scored just 17/40 for their Cha Cha Cha.

“That feels like a distant memory – but kind of a very real one. I felt like I was giving it my all but they just needed to see more energy,” said Sara.

“I went into it thinking, ‘I’m in control of this, I’ve got it, I’ve learned the steps’, I was really happy with myself.

“Then I got a 3 from Craig [Revel Horwood] and I was like, ‘Oh dear!’ But, I thought, it’s week 1, everyone’s going to get scores like that.

“I was quite near the front, and the show went on and on, and the leader board just stretched and stretched and I just kind of stayed here,” she said, pointing to the bottom of the leaderboard.

“I think I was bookie’s favourite to go out in Week 2 so I thought, ‘I’m going to show them’ – So, yeah! I kind of came out and smashed it in week 2 with my foxtrot,” she added.

And Sara did show them, scoring an incredible four 9s from the judges for their tango in week four.

But week five was less successful, with the pair landing second to bottom on the leaderboard with 25 points for their rumba.

“I think the thing that made me more determined is that I want to be the best,” Sara said of her dips to the bottom of the pile.

“When I do something in business, I’ve always found that the harder I work, the better I get at it. I felt like I’d worked really hard in that first week, and clearly my best wasn’t good enough.

“Then I just found that inner strength to plough on and go for it.”

Sara and Aljaž were accused of “going quiet” after their concerning performance last week, but returned to social media to confirm rehearsals for Halloween week were going well.

“I’m so sorry for the radio silence,” Sara told her Instagram followers.

“It has just been manic. So this week because it’s my Couple’s Choice, it’s like a really big dance, we’ve got outside choreography in, it’s just been non stop so I’ve had two really early starts and just been absolutely going for it.

“So I’ll update you a bit more on the dance tomorrow but I’m all good, it’s just tonnes of work and requiring loads of brain space.

She added: “I’ve been giving my all to the dances and I’ve got a busy day the rest of the day. I’ve just got into work, I’ve got a busy afternoon with some quite exciting stuff coming up.”