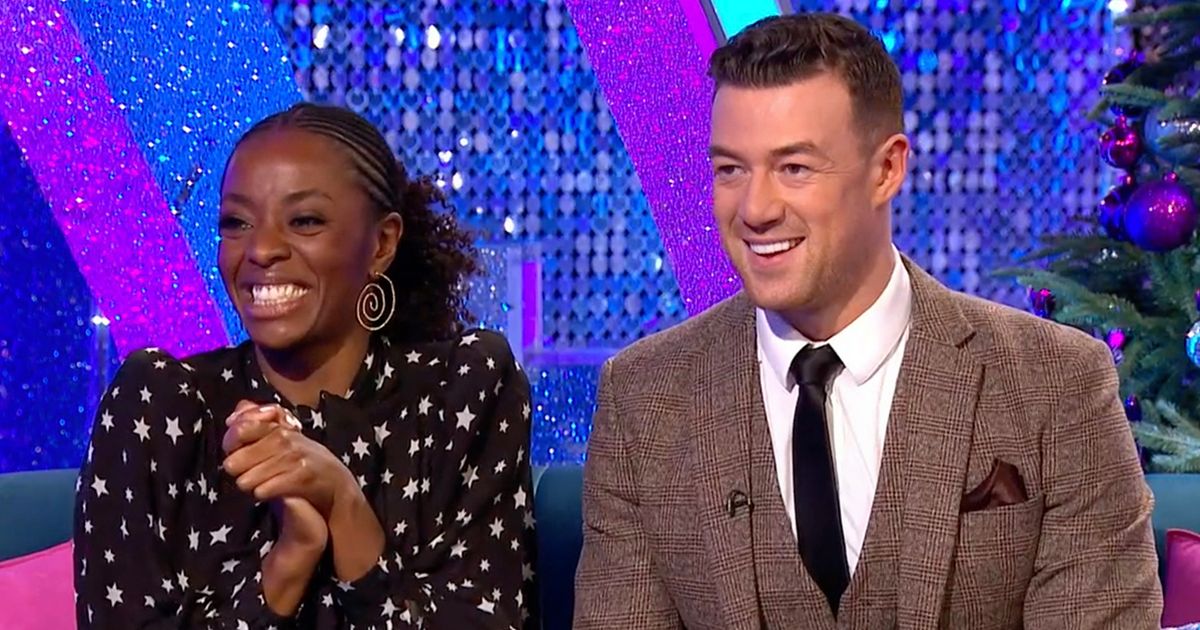 Strictly: AJ Odudu breaks down over her injury before the final

Strictly Come Dancing star AJ Odudu is leaning on her partner Kai Widdrington in every way possible after suffering an unexpected injury.

The 33-year-old TV presenter has made it to the final of the 2021 series, but her chances of winning are now hanging in the balance.

Taking to Instagram on Wednesday evening, AJ shared a snap of herself with a pair of crutches as she rested up after an appearance on Strictly – It Takes Two.

She captioned the post: “I’ve got a repeated traumatic impact injury to my right ankle affecting the joint, capsule and ligaments themselves.

“I can’t pinpoint a moment it actually happened during training but the pain came on suddenly on Monday night.

“The pain was so acute that I projectile vomited and currently I can’t put any weight on my right foot without agonising discomfort.”

AJ continued: “Because I’m unable to move without crutches, we haven’t been nor will be able to rehearse properly ahead of the live final. To say I’m devastated would be a huge understatement and I am gutted.

“THAT BEING SAID, whilst it’s not the week I had planned I’m trying to remain hopeful and positive.”

She then added: “I’m surrounded by a fantastic medical team who are trying their best to get me back on my feet PLUS, I have the most incredible partner @kaiwidd who is carrying me emotionally and physically (literally).

“Thanks for all your messages. I sincerely hope it will be all right on the night.”

Many of AJ’s famous pals and followers were quick to comment, including her fellow Strictly finalist John Whaite.

“Girl you better be there Saturday! There’s a glitterball with your name on it,” he wrote.

Professional dancer Giovanni Pernice, who is also dancing in the final with Rose Ayling-Ellis, commented: “You have got this !!! Come on.”

AJ’s post comes after she broke down in tears during an appearance on Wednesday’s It Takes Two as she explained her situation to host Janette Manrara.

“I’m upset because we were so excited on Monday, we’ve got three amazing dances that we really, really want to perform,” she said crying.

“I know I’m upset but I am genuinely remaining hopeful and I’m surrounded by a really great medical team who are trying their best to get me back on my feet.”

Strictly Come Dancing: The Final airs Saturday at 7pm on BBC One.