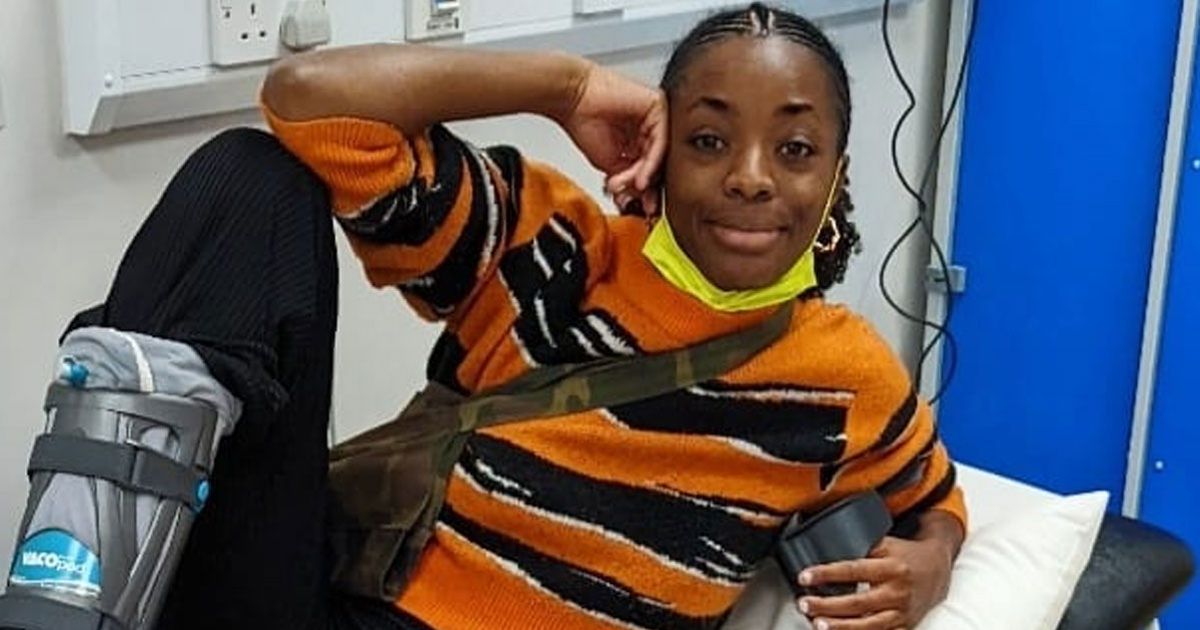 Strictly: AJ Odudu throws doubt on final as she confesses injury is ‘bad’

AJ Odudu detailed her devastating battle as she tried to get fit for the Strictly Come Dancing final before quitting the show.

The presenter had been hopeful she could make it through the final of the BBC One show, which takes place tomorrow evening, for a chance to lift the glitterball trophy.

But in a heartbreaking twist, AJ – who has been spotted on crutches for the last few days – has been forced to pull out the final, leaving just John Whaite and Johannes Radebe and Rose Ayling-Ellis and Giovanni Pernice vying for the trophy.

Breaking her silence on Instagram, AJ detailed her struggle to try and get better.

AJ has had to pull out of the Strictly final

AJ feels lucky to have the support of Kai

“How it started. How it’s going,” she began the post, “I’ve had ultrasounds, MRI scans and x-rays. I’ve had two incisions to drain the inflammation around my ankle. I’ve injected local anaesthetic directly into my foot, I have been strapped up to an ice compression machine for days.”

AJ insisted she had done everything she could to get better – and even suggested performing in her medical moonboot.

She added: “I’ve done all I can possibly do to get back on my feet for the @bbcstrictly Final, I even asked the docs if I could perform in a medical moonboot! But the fact is, I can’t stand on my feet let alone dance because I’ve torn my spring ligament.”

AJ has been struggling on crutches for the last few days

AJ was hoping to take to the dancefloor this weekend

AJ went on to heap praise on her professional partner Kai Widdrington for doing his best to support her, as she admitted she will be “gutted” not to be able to dance in the final.

She wrote: “Learning to dance over the last 13 weeks has been an incredible honour and to do it alongside someone as special, patient and devoted as Kai is something I’ll treasure forever.

“You’re the best @kaiwidd and I know you were ready to be my human crutch on that dancefloor come tomorrow night. Gutted!”

Kai and AJ had impressed viewers with their amazing dance routines

She finished her post by thanking the medical team on the show and the fans for their support.

“I want to say a huge thank you to the Strictly family for the experience, the medical team for trying to get me back on my feet and mostly, to everyone at home watching and supporting,” she added.

“You’ve made this experience one to remember and I couldn’t be more grateful for your well wishes. Strictly Come Dancing has been a lifelong dream of mine and I’m glad it came true. Good luck to my partners in dance, @john_whaite & @Johannesradebe and @Rose.a.e and @perniceGiovann1. I will be cheering you all on (on one leg).”