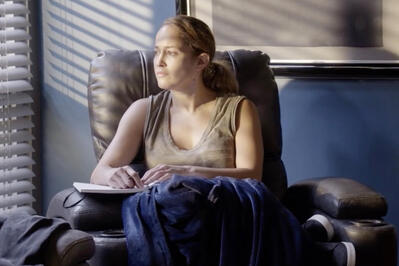 [Warning: The following contains spoilers for the the Season 4 premiere of Station 19. Read at your own risk!]

Station 19 picked up Season 4 mere seconds from where Season 3 left off, with Andy (Jaina Lee Ortiz) shell-shocked at the sight of her not-dead mother in front of her. After a severe panic attack, Andy got herself together enough to hear that her mother had suffered from depression and left Andy when she was nine years old to go fight fires in New York, leaving Pruitt (Miguel Sandoval) to put together the pieces. While he wasn’t a perfect man, this encounter with her mother left Andy to realize how much her father had done to provide her with a family despite her mother’s absence, just in time to deliver the eulogy at his funeral, which was broadcast over Zoom due to the COVID-19 pandemic.

Elsewhere, we saw how COVID-19 is affecting Station 19, as the first responders are separated from loved ones and have to provide care while also trying to uphold social distance guidelines. A few of the firefighters are bunking at the firehouse while others have moved in together, like Montgomery (Jay Hayden) and Hughes (Barrett Doss). That’ll set up a fun dynamic while it’s still awkward between Miller (Okieriete Onoadowan) and Hughes as Miller still struggles to figure out how to tell Hughes he’s in love with her. Of course, he’s not the only firefighter at Station 19 that’s going to find it difficult to stay away from someone he loves. Andy and Sullivan (Boris Kodjoe) decided to separate for 90 days to allow the former captain to get a better grip on his sobriety.

Will they be able to make it? How is COVID going to complicate the life of these firefighters and will it affect their ability to interact with the doctors at Grey Sloan? TV Guide spoke to Station 19 executive producer and director Paris Barclay about what to expect from Season 4, which as he describes, will be the deepest season the show has ever done.

Andy kind of rejects her mom in this episode, but we see that her mom still signed on for Pruitt’s digital funeral. Can you talk about how much Andy’s mom will be playing a part in the season as we go forward?
Paris Barclay: I think Andy will never forget her mom, but she does make a decision that she honors Pruitt’s sacrifice and that’s what that last scene is about. She looks beyond her mother, and what her mother did or didn’t do, and focuses her attention on Pruitt. That last speech that she gives, in the motel room, you can see that she’s moving towards understanding that Pruitt gave her a lot really. [He] gave her a life and gave her a career. So that’s really going to be much more the focus than the mother.

Andy and Sullivan are separating for three months. What does that journey look like at the start of the season?
Barclay: They will find their way. They’ll struggle, they’ll have their ups and downs as they go through the period of separation, but we’re basically just seeing that period begin when Season 4 starts.

What does Sullivan’s journey look like if he’s not a firefighter and he’s quit his job at the private firm?
Barclay: That’s the question he was asking himself in this very first episode. He’s got to find a way. He’s got to find a place to be. He’s got to find a life for himself. He’s got to face the consequences of his actions. And I think the first few episodes of the season are going to be about him navigating that, which is a really interesting story for us, because we do like to really dig into drug addiction and what it means, but it’s also going to really impact both his relationship, his career, and all the people that used to be his team. So his struggle is going to be a large part of the story going forward.

Can you talk about how the pandemic is going to affect the firefighters going forward and how it changes their job, due to everything that’s going on?
Barclay: One of the many brilliant things that Krista Vernoff and the writers did this season is [they] decided to embrace COVID and really try to drive home the cost to the first responder community. That’s a story that hasn’t been told and I don’t think will be told with as much vividness. You take our first responders, our doctors, and our firefighters that people already love, you put them in the situation, which creates an immediate turmoil for them personally, and for the people they love — and it’s a powder keg. So by actually really running into it and accepting and embracing what’s happening in the real world today, I think Krista and the writers have found a way to go much deeper with the characters. This season is by far the deepest that we’ve done.

Dean says he knows what he has to do about this feelings for Hughes in this episode. What does that mean exactly?
Barclay: I think Dean has a lot of obligations that are tearing him apart. He has an obligation to his child. He’s decided to really continue to follow up and continue to be there for that baby and to raise that child. So that’s one obligation. He has an obligation to his family, and he knows a relationship with someone in that family, meaning of the Station 19 family, a relationship with someone in that family could kind of rupture that. So I think he’s going to try to balance those things. I think he’s going to be not as successful as he’d like to be.

In the meantime, Montgomery and Hughes are moving in together. What can we expect from those two this season?
Barclay: I wish I could say we’ll have nothing but fun, but we will have mostly fun…Vic and Travis together are, you know, they’re a comedy team, but they’re also a love team. They have a really tight bond and they really have a brother and sister relationship. I think that’s where a lot of the fun of them springs, but they’re also going to be faced with some pretty dramatic situations in their own lives and their humor is not going to go away. I mean, even in those dramatic situations that would pull an ordinary person down, these are not ordinary people. And so they’re going to continue to sparkle even in adversity.

With added filming precautions because of the pandemic, will we be seeing less of a crossover with Grey’s Anatomy this season?
Barclay: I think we’ll see about the same amount of crossover as we did last season, perhaps a little bit more. We’re very much in tune with the two shows, with our safety protocols. How we protect our cast and our crew is paramount… it’s more important than shooting the show itself. We have to keep a safe environment, so we’re very much in sync. We talk weekly about what we’re doing and how our shows are working together. So it hasn’t impeded our ability to crossover actors. We did just steal Stefania, but we had to because the relationship with Maya is so, so loved. It’s our great romance right now. So we had to steal her and now she’s going to be a regular on Station 19. I think both shows will be better for it.