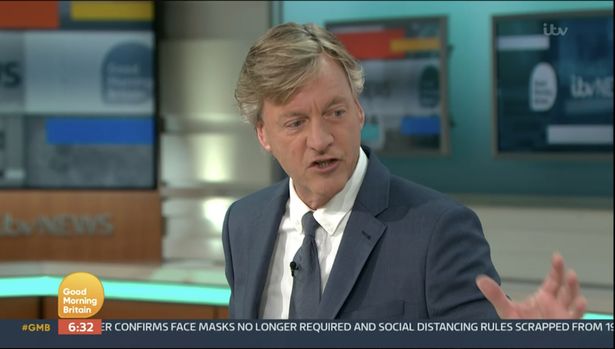 Good Morning Britain fans have criticised Richard Madeley for his “insensitive” comments after Ranvir Singh broke down on the show.

The presenters – including Susanna Reid and Andi Peters – were discussing the vile racist abuse experienced by England players after they lost out on the top prize at the Euros over the weekend, when Richard made the comment.

In the chat, Susanna admitted it “broke her heart” to see the abuse the players had received.

“It breaks my heart. My children saw it yesterday. It’s disgusting. It’s absolutely unacceptable that that had got through any social media filter,” she said.

He told her: “Now look here Ranvir, you’ve got to read the news. Dry your eyes.”

However, his suggestion didn’t go well with the show’s fans who fumed at him on Twitter.

One wrote: “Absolutely appalled at how insensitive @richardm56 is here. ‘You’ve got to read the news, dry your eyes.'”

“@GMB get rid of Richard Madeley! @ranvir01 truly emotional talking about racism and he says “dry your eyes you’ve got to read the news”!! Unbelievable! #gmb,” another added.

A third shared: “Quite a moment on live TV there as @ranvir01 breaks down discussing the vile racist abuse that’s been thrown about. @richardm56 ‘Wipe your eyes, you’ve got the news to read” Come on Richard….’THINK’ @GMB @susannareid100.”