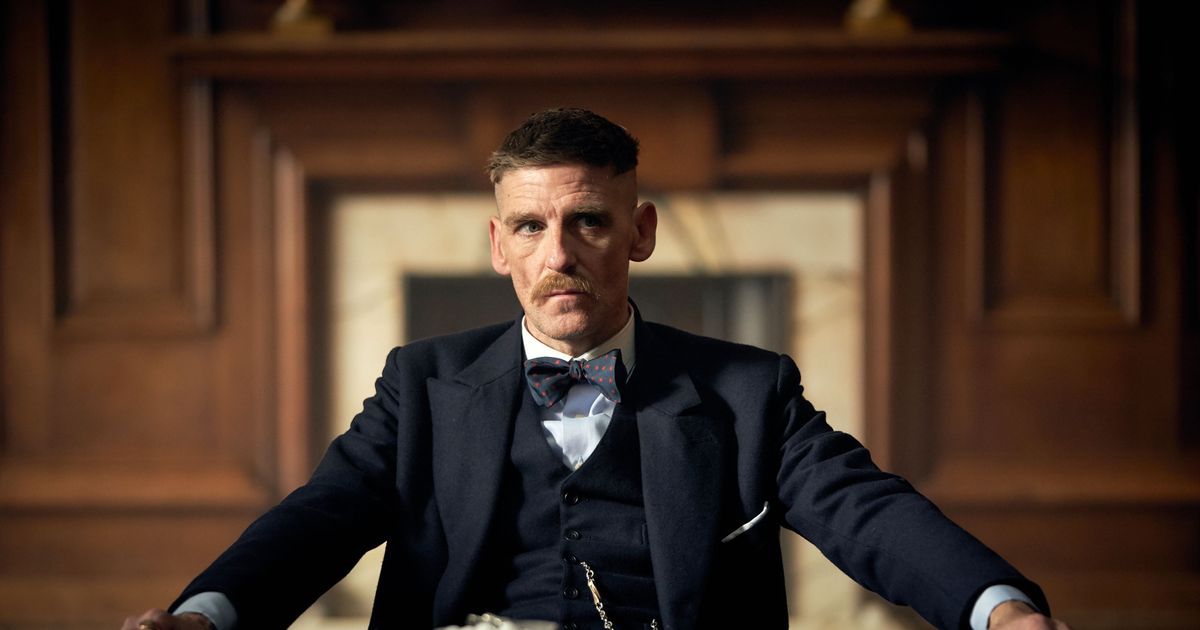 Thankfully for everyone who knows him, Paul Anderson is very different Arthur Shelby in real life.

The Peaky Blinders actor has starred in the hit BBC series since the very first episode and has become famous for his incredible deep Brummie accent.

Paul, 43, can’t quite understand why fans love his violent character, who has beaten men to death with a hammer and killed a boy in a boxing match.

“The thing I love about him and why I like playing him is he’s not just one-dimensional – he’s tough and he can be violent and brutal, but he’s not just that. He’s got this inner turmoil.”

While Paul’s life might be different to Arthur’s now, he kicked off his acting career by getting on the wrong side of the law.

He was flogging tickets outside a football ground and ended up getting his big movie break when he sold some to a film director.

“I always wanted to be a ­frontman in a band. Not a ­footballer. Not an actor. Certainly not a policeman or a fireman.

“I wanted to be a lead singer. Nothing else.”

When Paul sold tickets to film director Nick Love for the Chelsea v Barcelona game his life was to change for ever.

Nick thought Paul was perfect for the part of thug Bex in The Firm, a 2009 film about football hooligans.

Paul said: “I happened to be outside and I was handling the odd ticket or two and sort of exchanging them for money. He was with a bunch of friends and I sold them ­tickets.”

The star said the movie-maker found his touting “exotic” and later offered him a role in the film.

Paul, who appeared in the Doctor Who Christmas Special in 2005, had roles in Ashes to Ashes, Silent Witness, Lewis and Top Boy.

His first major role came as Colonel Sebastian Moran in Sherlock Holmes: A Games of Shadows and he also teamed up with Peaky Blinder co-star and on-screen brother Cillian Murphy in In the Heart of the Sea in 2015.

“We’re very different from Tommy and Arthur Shelby in the film,” said Paul, who revealed they would use their Peaky Blinders voices on set.

“We used to laugh about it. We’d be on this boat in the middle of the Atlantic Ocean and we’d talk in our Birmingham accents just for a second between takes.

“I love Cillian. He’s a real friend. But that movie was really tough. I found that film extremely difficult. We’d spend 12 hours out at sea.”

Paul has also starred alongside another Peaky Blinder co-star, Tom Hardy, in The Revenant along with Leonardo DiCaprio.

The actor, who is from South London rather than Birmingham, hasn’t shared many details about his love life but he is not married.

He was previously linked to jewellery designer Stephy Clark but has not spoken publicly about any relationship.

In the past, he has featured her on his social media and shared snaps of them both with his followers on Instagram.

For almost his entire time on Peaky Blinders, Paul has been in constant fear that Arthur will be killed off by writer Steven Knight, especially as he lives so dangerously.

“We have no idea what Steven’s going to do, and Steven never does what we think he’s going to do. Last season, we never saw that whole thing with Sam Neill and Polly coming,” he said after series 2.

“I was actually convinced that Arthur was going to get killed in season two because he’d left such a trail of destruction behind him.”

Paul thought Arthur would be killed off
(

Paul managed to baffle a lot of fans at the end of 2020 when he promised the new series was coming “very soon”.

The nation had just been plunged into a second lockdown amid the coronavirus pandemic, so viewers were left scratching their heads as to how long he actually meant.

While posting some artwork of his character on Instagram, he wrote: “Season six #comingfknsoon. Thanking you all for the wait, it will be worth it.”

But the series had to be pushed back as filming could only start again in early 2021 – meaning the release of the new episodes was delayed until this month.

Director Anthony Byrne told Digital Spy: “We were so close to the start of filming season six.

“Sets were built, costumes were made. Cameras and lenses tested. Locations were booked. All the prep was done. It’s a real shame not to be able to make it for you at this time.”

There is plenty to get excited about ahead of tonight’s opening episode, which will see the Shelby family come together once again to take on a worrying new threat.

Tom Hardy will be back on Peaky Blinders with Paul
(

As well as all the old favourites, joining the cast for the final series is Line of Duty actor Stephen Graham, whose will character is set to clash ­violently with Tommy.

However, one character who won’t be returning to our screens this time around is Polly Gray, the matriarch of the Shelby clan, as much-loved actress Helen McCrory sadly died of cancer in April 2021 at the age of 52.

Last month, Paul posted a black and white photo of him and co-star Cillian Murphy in costume as he teased what’s to come.

“This is the first ever image of Tommy and Arthur,” he wrote on his Instagram page.

“We picked these guns up for the first time 10 years ago, and next month we put them down for the last time!

Do you have a story to share? E[email protected]