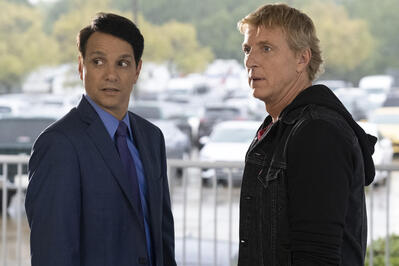 Netflix was one of the few content providers that were able to keep a steady stream of shows, movies, documentaries, and specials flowing to customers throughout 2020, despite the difficulties created by the COVID-19 pandemic. That doesn’t mean the streaming service’s productions weren’t affected by the virus, though. Netflix also had to shut down many productions and delay release dates, which means there might even be a surplus of Netflix originals to watch in 2021.

Netfiix will kick off the year in a big way with the third season of Cobra Kai in January and new film Malcolm & Marie in February. The movie, one of the first feature films shot entirely during the pandemic, stars Zendaya and John David Washington as a couple whose marital issues all surface over the span of one tense night. Later in the year, Netflix will have the final season of Justin Simien’s Dear White People and potentially another installment of Stranger Things.

Here’s a list of all the Netflix originals set to premiere in 2021, organized by month. Check back as more series, movies, documentaries, and other premieres are announced.

Cobra Kai Season 3 (Jan. 1): Cobra Kai, now a Netflix Original, takes place over 30 years after the events of the 1984 All Valley Karate Tournament, continuing the inescapable conflict between Daniel LaRusso (Ralph Macchio) and Johnny Lawrence (William Zabka). Season 3 finds everyone reeling in the aftermath of the violent high school brawl between their dojos, which has left Miguel in a precarious condition. While Daniel searches for answers in his past and Johnny seeks redemption, Kreese further manipulates his vulnerable students with his own vision of dominance. The soul of the Valley is at stake, and the fate of every student and sensei hangs in the balance.

Headspace Guide to Meditation (Jan. 1): Over the course of eight animated episodes, Andy Puddicombe — former Buddhist monk and co-founder of the Headspace meditation app — takes viewers through the benefits and science behind meditation.

The Minimalists: Less Is Now (Jan. 1): The film’s title was inspired by the popular maxim “Less is more,” popularized by architect Ludwig Mies van der Rohe (1886–1969), who used this aphorism to describe his design aesthetic; his tactic was one of arranging the necessary components of a building to create an impression of extreme simplicity. The Minimalists have reworked this phrase to create a sense of urgency for today’s consumer culture: now is the time for less.

Monarca (Jan. 1): Spanish-language series Monarca will be kicking off the year with even higher stakes than the first season. The series focuses on the criminal underbelly in Mexico, following a multi-generational family involved in a business empire unlike any others.

We Can Be Heroes (Jan. 1): When alien invaders kidnap Earth’s superheroes, their children must team up and learn to work together if they want to save their parents and the world. The cast of this standalone sequel to The Adventures of Sharkboy and Lava Girl in 3-D includes Pedro Pascal, Priyanka Chopra, Christian Slater, Boyd Holbrook and Taylor Dooley.

Asphalt Burning (Jan. 2): The third film in the Norwegian action comedy film series Børning, a take on the Fast and Furious movies, Asphalt Burning follows Roy (Anders Baasmo Christiansen) as he accepts a challenge to race a new foe for his own runaway bride at Germany’s Nürburgring track.

Gabby’s Dollhouse (Jan. 5): The series leads preschoolers room to room through a dollhouse of mini-worlds and kittens.

History of Swear Words (Jan. 5): An education in expletives: the history lesson you didn’t know you needed. History of Swear Words, hosted by Nicolas Cage, is a loud and proudly profane series that explores the origins, pop culture usage, science, and cultural impact of curse words. Through interviews with historians, entertainers, and experts in etymology and pop culture, the six-episode series dives into the origins of “F—,” “Sh–,” “Bitch,” “Dick,” “P—y,” and “Damn.”

Surviving Death (Jan. 6): An in-depth investigative series exploring the possibility of an afterlife, based on Leslie Kean’s book of the same name.

Pieces of a Woman (Jan. 7): Vanessa Kirby gives a stunning performance in this heart-wrenching film about a couple in the year following the loss of their baby.

Stuck Apart (Azizler) (Jan. 8): This Turkish movie is about a middle-aged man who is not content with life and starts a web of lies to break out of his routine.

CRACK: Cocaine, Corruption & Conspiracy (Jan. 11): In the early 1980s, the crack epidemic tore through America’s inner cities like a tsunami, ravaging all in its wake. Decades later, the destructive effects on people’s lives, families and communities are still deeply felt. Crack: Cocaine, Corruption & Conspiracy examines not only the personal devastation caused by the drug, but also the shadowy origins of the crisis and the resultant, ongoing marginalization of Black and Brown people trapped by the U.S. prison and healthcare systems.

Night Stalker: The Hunt for a Serial Killer (Jan. 13): The spellbinding true story of how one of the most notorious serial killers in American history was hunted down and brought to justice.

Bling Empire (Jan. 15): A reality series that follows LA’s wildly wealthy Asian and Asian American fun seekers as they go all out with fabulous parties, glamour and drama.

Carmen Sandiego Season 4 (Jan. 15): Carmen continues to travel around the world to stop V.I.L.E.’s evil plans in their tracks.

Disenchantment Season 3 (Jan. 15): The adult animated comedy fantasy series follows the medieval misadventures of hard-drinking young Princess Bean, her feisty elf companion Elfo and her personal demon Luci. Along the way, the oddball trio encounter ogres, mermaids, walruses, and lots of human fools, all while uncovering the deeper mystery of Dreamland. In Disenchantment Part 3, Bean continues to grow into her power and own her destiny. As the fearless friends venture out to discover new worlds, they might just find there really is no place like home.

Outside the Wire (Jan. 15): Set in the future, a drone pilot (Damson Idris) is sent into a deadly militarized zone where he finds himself working for an android officer (Anthony Mackie) tasked with locating a doomsday device before the insurgents do.

Hello Ninja Season 4 (Jan. 19): Wesley, Georgie, and Pretzel return for another round of adventures on Netflix Jr.

Daughter from Another Mother (Madre solo hay dos) (Jan. 21): After realizing their babies were exchanged at birth, two women develop a plan to adjust to their new lives: creating a single —and peculiar— family.

Fate: The Winx Saga (Jan. 22): This live-action young adult series is inspired by the Italian animated series about a fairy boarding school under attack by an old enemy.

Jurassic World: Camp Cretaceous Season 2 (Jan. 22): Jurassic World: Camp Cretaceous follows a group of six teenagers chosen for a once-in-a-lifetime experience at a new adventure camp on the opposite side of Isla Nublar. But when dinosaurs wreak havoc across the island, the campers are stranded. Unable to reach the outside world, they’ll need to go from strangers to friends to family if they’re going to survive.

The White Tiger (Jan. 22): Ava DuVernay serves as executive producer on this movie about a man’s rise from a poor villager to a hugely successful businessman in India.

50M2 Season 1 (Jan. 27): The brand new crime drama series is about a hitman who assumes a new identity after betraying the trust of his bosses.

Penguin Bloom (Jan. 27): Naomi Watts plays Samantha Bloom, an outdoorswoman who is paralyzed from the chest down after falling off a rooftop and finds hope again when she bonds with a baby magpie her children bring home a year after her accident.

The Dig (Jan. 29): Carey Mulligan, Ralph Fiennes, Lily James, Johnny Flynn, and more star in this period drama set just slightly before World War II, in which a wealthy widow hires an archaeologist to excavate her estate and they stumble on something that has the potential to change their lives.

Finding ‘Ohana (Jan. 29): A summer in rural Oahu takes an exciting turn for two Brooklyn-raised siblings when a journal pointing to long-lost treasure sets them on an epic adventure with new friends and leads them to reconnect with their Hawaiian heritage.

High Rise Invasion (TBD in February): Anime series based on the manga created by Tsuina Miura and Takahiro Oba.

Firefly Lane (Feb. 3): Based on the novel of the same name by Kristin Hannah, the series follows two friends (played by Katherine Heigl and Sarah Chalke) through several decades and explores how they stick together through thick and thin.

Malcolm & Marie (Feb. 5): A black and white film starring Zendaya and John David Washington about a couple whose relationship issues come to the surface after a tense evening. The film was made during the pandemic, shot at Caterpillar House in California.

Red Dot (Feb. 11): This psychological thriller follows a couple trying to rekindle her relationship in Northern Sweden who find themselves on the run from an unknown shooter. This is Netflix’s first full feature film from Sweden.

To All the Boys: Always and Forever (Feb. 12): In the final installment in the To All the Boys film series, Lara Jean Covey (Lana Condor) prepares for the end of high school and the start of adulthood, and a pair of life-changing trips lead her to reimagine what life with her family, friends, and Peter (Noah Centineo) will look like after graduation.

I Care a Lot (Feb. 19): A woman taking advantage of her elderly clients makes what could be a grave mistake in this comedic thriller starring Peter Dinklage, Rosamund Pike, and Eliza Gonzalez.

Call Me Crazy (Feb. 26): After a magical one night stand with the cryptic and enigmatic Carla (Susana Abaitua), Adri (Álvaro Cervantes) decides to admit himself at the mental institution where Carla resides in order to see her again, but he will soon discover that checking himself out will not be as easy as he thought.

Shadow and Bone (April TBD): The series is an adaptation of Leigh Bardugo’s Grishaverse fantasy novels, in which a young girl, Alina (Jessie Mei Li), discovers she is a Grisha — a person with magic — and may be the key to uniting her fractured people when she’s taken under the wing of their leader, the Darkling (Ben Barnes).

Age of Samurai: Battle for Japan: This docudrama focuses on the warring kingdoms of feudal Japan.

Behind Her Eyes: This psychological thriller is based on the 2017 novel of the same name.

Ginny & Georgia: This coming of age story centers on an angsty 15-year-old named Ginny Miller (Antonia Gentry) and her mother Georgia (Brianne Howey) as they attempt to start a new and normal life in New England.

Go, Dog, Go!: Tag and Scooch are two young pups living in Pawston who are always on the go and exploring their world. The series is based on the children’s book of the same name.

I Do, Redo: Jessica Mulroney hosts this series, which gives couples a second chance at the perfect wedding day.

Kid Cosmic: The new series from the creator of The Powerpuff Girls centers on an odd, imaginative boy who acquires superpowers after finding five cosmic rings.

Pacific Rim: The Black: As monsters emerge from the sea to attack Earth, humanity must fight back using giant robot warriors in this anime adaptation of the blockbuster film franchise.

Transformers: War for Cybertron Trilogy: The Transformers franchise follows the Great War between the Autobots and the Decepticons.