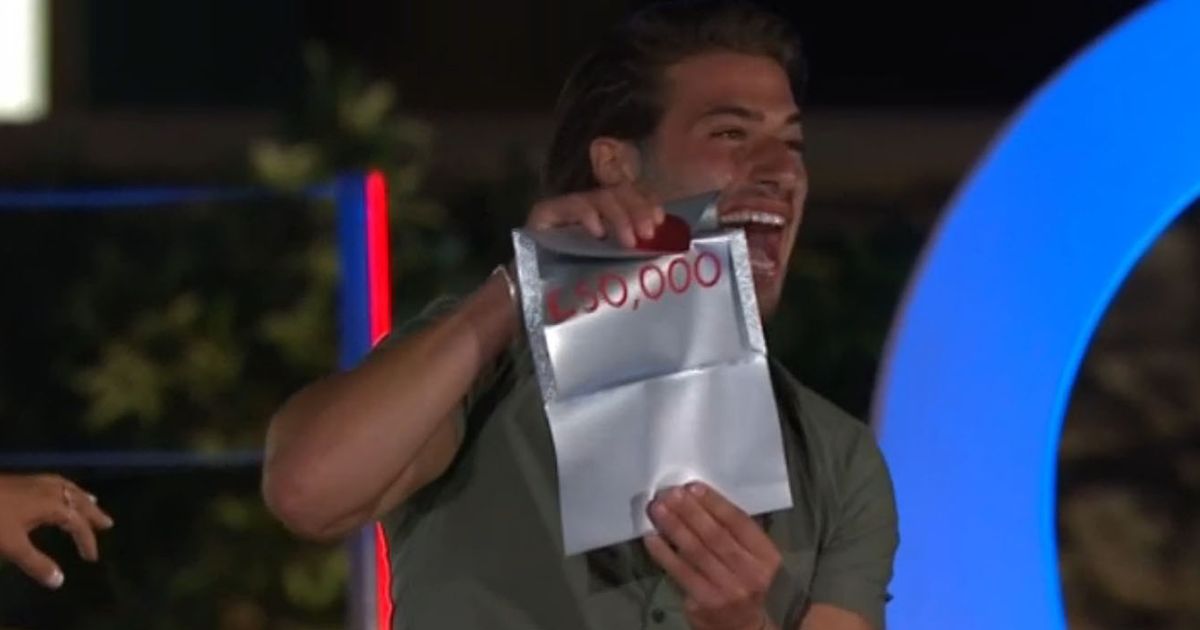 The Love Island winners have no time to celebrate as they are forced to make a life-changing decision – but with £50,000 on the line will they choose ‘money or ‘love’?

The Love Island stars claim they are only in the villa to find romance – but we all know they have their eye on that big money prize.

Some may claim that winning the ITV2 dating show is enough of a reward by itself due to the exposure, deals and fame it brings.

But there is another massive incentive to win as those voted as champions by the public during tonight’s live final will get their hands on a whopping £50,000.

However, you have to remember this is a reality TV show and nothing is as easy as it seems.

After being crowned winners, the two loved-up Islanders will have no time to celebrate as they are forced to make a life-changing decision.

In the final of every series there has been a shock twist at the end as the winning couple’s relationship is put to the test for one last time.

One of the winners receives an envelope containing nothing, while the other has the coveted £50,000 inside.

It’s then up to the person holding the dosh to decide whether they greedily keep all of the money for themselves, or share half of it with their new partner.

The final twist will ultimately determine whether they have found true love or if they were playing a massive game all along.

There has been some disappointment over the last few years as the original big money twist has been tampered with – with Love Island fans universally agreeing it’s become more boring.

In series one, Jess Hayes and Max Morley both had the power to decide if they wanted ‘love or money’.

Love Island bosses used the same format as hit gameshow Golden Balls, where they split the cash if both of them chose ‘love’.

The first series saw Jess and Max both make a choice

If one choses ‘money’ but the other choses love, the ‘money’ picker would win the entire £50k, but if both chose ‘money’ they would both go home with nothing.

Jess and Max, who were surprise winners after beating engaged couple Jon Clark and Hannah Elizabeth, chose ‘love’ and each won £25k.

Although Jess has since admitted she wishes she had kept all the money as the couple split up just six weeks after leaving the villa.

“Don’t fall in love and just take the fifty grand,” Jess warned future contestant during a Facebook live with the Daily Star.

The current format was first used in 2016 when Cara De La Hoyde and Nathan Massey won – and they have gone on to get married and have two kids together.

The following year, there were hints that a “big change” was coming to the way the winning couple would be offered the £50,000 prize money, which led to speculation that only one Islander would walk away with the cash.

But what ended up happening was virtually the same as before when Kem Cetinay picked the envelope containing the £50,000, leaving Amber Davies with nothing, unless he chose to part with half of the cash.

His decision was never really in doubt, as Kem said: “Of course I’m going to share it.”

Things didn’t work out well for Kem and Amber as they parted ways just 132 days after the show ended, but it is said they both earned £1million after leaving the villa.

Dani Dyer and Jack Fincham also shared the moolah when they won in 2018 – but separated a year after being crowned winners.

In 2019, Amber Gill and Greg O’Shea rose to victory in just the final few weeks and split the prize, with the Irishman stating: Of course I’m going to share it with her.”

When asked about Greg’s choice, Amber said: “Yeah I knew he was going to share it.”

Greg decided to share the cash prize with Amber

Fans were left disappointed when Greg was given the power and chose to share the winnings because it was ‘boring’.

One viewer said: “Still waiting for someone to keep the money and run. Why is everyone so f****** boring”.

One couple will have a big decision to make during tonight’s final as they pick between ‘love or money’.

It remains to be seen whether they will share the money, or if someone will finally make it exciting and stealing all the cash.

Earlier in the series, some viewers speculated that Millie and Teddy were only getting back with their partners as part of a long-term revenge scheme.

While others claimed Liberty and Kaz, who clearly have the best relationship of anyone this series, should have coupled up as friends to win the money.

Jake says he would have split the money with Lib

Departed Islander Jake Cornish has insisted he would have shared the £50,000 prize money with his ex Liberty if they’d stayed together and won the show.

After splitting up, the pair decided to leave the villa to allow the other couples to enjoy their last few days together.

Opening up on his devastating split from Liberty, Jake has insisted he wasn’t playing a game during the show.

He claimed that if the couple had stayed together and been voted winners he would definitely have shared the prize money with Lib.

Speaking exclusively to The Mirror, Jake explained: “There’s no way I’d keep that to myself.

My whole journey has been Lib.

Will this finally be the year we see someone steal the £50k?