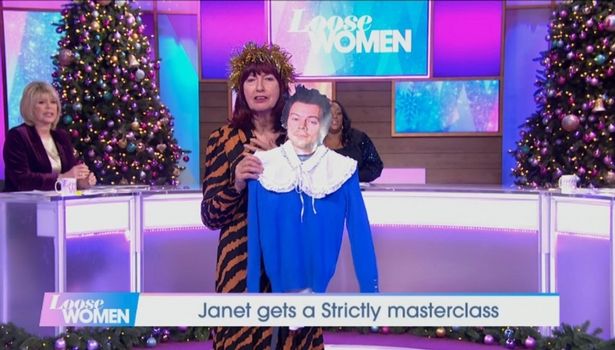 Today’s Loose Women had viewers in stitches as Janet Street-Porter displayed her dance moves under the instruction of Strictly’s Motsi Mabuse.

Motsi will be back on our screens come Saturday night for the Strictly semi-finals, and ahead of the show video called into Loose Women to give her thoughts on the class of 2020.

And Ruth Langsford decided to have a bit of fun as she told Janet to get up on her feet and show off a few moves.

As Motsi gave her first instructions, Janet rummaged behind the desk to produce a cardboard cut-out of Harry Styles.

“I’ve got Harry!” Janet declared as Motsi burst out laughing.

“You’re right!” Susanna laughed, “I think a lot of people are seeing him differently.

“Previously, he was annoying and antagonistic and a massive wind-up, and he’s still all those things, but he’s also holding the government’s feet to the fire.

“When we have the ministers on, he’s holding them to account in a way that a lot of people think other outlets aren’t doing.”