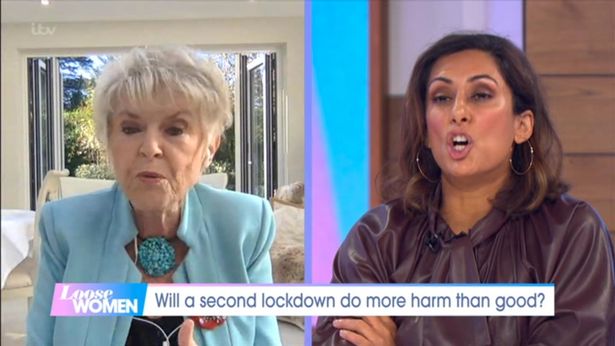 Things became so heated that host Andrea McLean was forced to step in to calm them down during the break.

Saira, 50, was clearly very worried about how businesses would be affected by the month-long lockdown, which starts on Thursday.

She also pointed out the problems with mental health it would cause.

“I’m actually really disappointed,” Saira said, explaining that she was supporting a campaign called Time For Recovery which argues that “lockdown isn’t the answer”.

“The need to keep the nation healthy, you’ve also got to balance that with the need to keep people fed, active and productive,” she said. “I think what we have learnt since the last lockdown in March is that most people have put social distancing in place in the workplace.

“And Boris [Johnson] did not want to necessarily go into a national lockdown, but sometimes you have to and these figures are absolutely critical. We have to try and break that circuit they talk about.

“We have to do something. And it horrifies me that 700 young people last night were at a rave in Bristol and so there comes a point where we all, young, middle aged, old, whatever, you take it into your own hands and do something positive.”

Saira interjected to say that everyone would be paying for furlough for many years to come, to which Gloria asked: “Would you rather people die instead?”

She later said that she “respected Saira as a businesswoamn and accused her of “not having the answer” to coronavirus.

“I’m not saying I have the answer, I’m giving a different approach and a different opinion – we have to have this balance,” Saira.

The show quickly descended into a shouting match, with both of the panelists shouting over one another.

Loose Women later went to a break and when it returned, Andrea insisted to viewers: “We’re all friends, it’s all calmed down.”