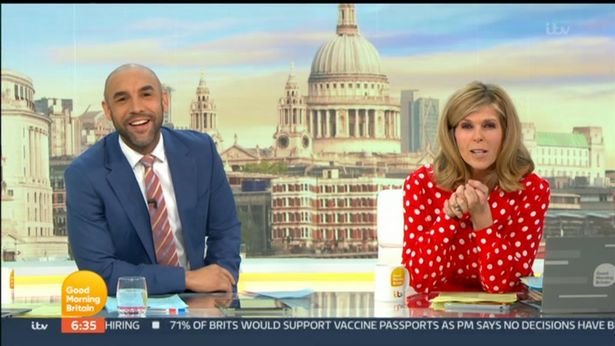 Kate Garraway supported her co-host Alex Beresford on Good Morning Britain on Friday, welcoming him back to presenting duties with it being a while since he hosted the morning programme.

Alex hosted GMB alongside Kate, a week on from his return to the show to host the weather following around 10 days off.

The weather reporter went viral after his on-air row with Piers Morgan earlier this month, over comments the former host made about Meghan Markle and Prince Harry.

Piers stormed off set during the live row, before quitting the show completely just hours later.

Alex did not appear on the ITV show after, amid calls for the presenter to host the show full-time.

While Alex has hosted the show in the past, and regularly hosts the weather, some viewers want to see him more on the show especially after his speech to Piers went viral – with it being a fair while since he hosted the main show.

Meghan said she felt suicidal while pregnant with Archie, and Piers said he “didn’t believe a word” of what she was saying – with his remarks sparking a record-breaking number of Ofcom complaints.

He marched off the set saying “I am not having this” as Alex branded him “diabolical” before Piers quit his role as host that night.

Alex later spoke out on Twitter, admitting he didn’t want things to go the way they did while Piers revealed he had cleared his dressing room this week, denying he would ever return.