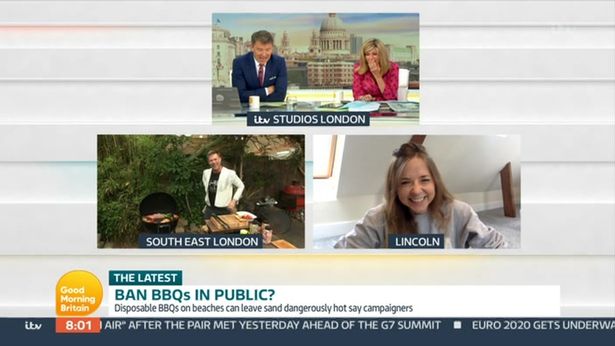 Kate Garraway suffered an awkward blunder on Good Morning Britain after accidentally calling a guest by the wrong name.

The host, 54, had been interviewing BBQ chef Christian Stevenson with co-host Ben Shephard when she randomly called him “Daniel”, later admitting that she had no idea why she had done so.

As they debated on the show whether BBQs should be banned from parks and public places, Ben was stunned when Kate suddenly referred to Daniel.

Kate had initially been confused by Ben’s intervention and he repeated the name again, remarking: “I’m not sure who Daniel is.”

She told co-host Ben: “Peugeot lent me a car to get down to Cornwall with the family.

“I was so careful. I was like a paranoid beast and my dad is with me and you know what my dad is like Ben.

“Anyway I think something happened in the car park as it looks like a cat as done that on it.”

Sceptical, Ben laughed as he asked: “What a cat scratched your car?”

Kate appeared extremely apologetic and said: “Anyway, something has happened to it.

“So I apologise for that. It was a brilliant car. I will sort it out I promise.”