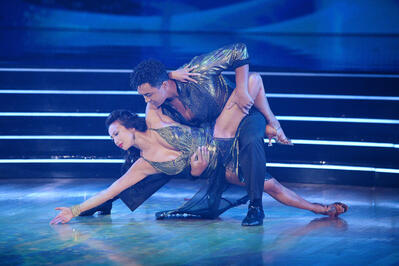 Jeannie Mai has left Dancing With the Stars due to a health concern. Mai announced the news on Good Morning America, saying that she has been diagnosed with epiglottitis, which causes inflammation and swelling to the throat. She has since been hospitalized to treat the condition.

In her statement, Mai said, “My doctors discovered a health concern with my throat which requires immediate attention and surgery. I am heartbroken that my DWTS journey has to end here. I have pushed myself to new limits, physically and mentally, and I am so proud of how far we’ve come.”

Mai’s DWTS partner, Brandon Armstrong, also released a statement on GMA, saying, “We are devastated by the news that we’re going to have to cut this season short, but Jeannie’s health does come first.”

The show confirmed the news in a tweet, saying, “Jeannie has inspired us, along with millions of fans, with her energy and dedication. We wish her a full and speedy recovery.”

Monday’s episode of DWTS was originally scheduled to feature a double elimination, but now only one couple will be sent home due to Mai’s exit.

Mai and Armstrong narrowly avoided elimination on last week’s villains-themed episode, finding themselves in the bottom two couples after earning a 25/30 score from the judges for their Silence of the Lambs-inspired paso double. The judges ultimately voted to save Mai and Armstrong, eliminating Monica Aldama and Val Chmerkovskiy instead.

Dancing With the Stars airs Mondays at 8/7c on ABC.