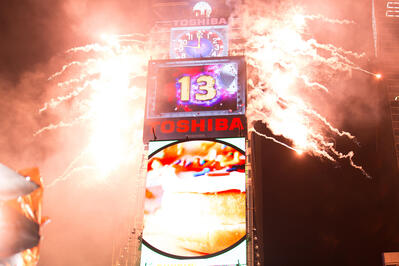 It is finally almost time to ring in the new year, and after the way 2020 has gone, who isn’t looking forward to a little end-of-the-year cheer? Even though crowds aren’t able to gather for the most famous New Year’s Eve celebration of all — the ball drop in Times Square — there are still ways to watch the festivities, whether you want to watch on TV, laptop, phone, or whatever is most comfortable.

Regardless of how you want to watch, TV Guide has you covered. While there are many networks that are hosting New Year’s Eve celebrations, the following programs are being hosted from Times Square and will feature the iconic ball drop at midnight ET on Friday, Jan. 1. Check out how to watch the ball drop in Times Square on New Years Eve, wherever you are.

The Livestream (no cable required)

If you’re without cable and want a no-fuss way to watch the ball drop, you can watch the livestream on NewYorkTimesSquare.org. There are no commercials, and you get backstage access, behind-the-scenes stories, and interviews with performers and other celebrities leading up to the ball drop at midnight ET.

Ryan Seacrest will host Dick Clark’s New Year’s Rockin’ Eve for the 16th year in a row. The festivities kick off at 8 p.m. ET on Thursday, Dec. 31, and Seacrest will be jointed in Times Square by Billy Porter and Lucy Hale, with Ciara hosting the celebration in Los Angeles. Jennifer Lopez will be the headlining musical performer, hitting the stage just before the ball drops. Porter will also perform a duet with Cyndi Lauper, who wrote the music for Kinky Boots — the musical that won Porter a Lead Actor in a Musical Tony in 2013.

To watch, tune in to ABC or ABC.com or watch on the ABC App. The celebration will also be available on demand on Hulu starting on Jan. 1.

Real-life BFFs Andy Cohen and Anderson Cooper reunite once again to ring in the new year in New York City for CNN. The festivities on the network will also kick off at 8 p.m. ET on Thursday, Dec. 31, and even though the event is closed to the public, the special will feature performances and appearances from John Mayer, Snoop Dogg, Patti LaBelle, Jimmy Buffett, Carole Baskin, Josh Groban, Leslie Jordan, Dulce Sloan, Desus & Mero, Kylie Minogue, Aloe Blacc, Goo Goo Dolls, and Jon Bon Jovi.

A live stream of the celebration will be available on CNN.com and CNN apps. It can also be viewed on CNNgo and via CNNgo apps for Apple TV, Roku, Amazon Fire, Samsung Smart TV, Chromecast, and Android TV.

Over on NBC, Carson Daly will host the New Year’s Eve proceedings from the heart of Times Square. The NBC special also works for the later crowd, with festivities airing from 10 p.m. ET to 11 p.m. ET, and then returning at 11:30 p.m. ET after your local NBC news. Daly will be joined by Amber Ruffin and Steven “tWitch” Boss, and the NBC celebration will feature performances from across the country from the likes of Chloe x Halle, Jason Derulo, Kylie Minogue, Pentatonix, Blake Shelton, Gwen Stefani, and more.

You can watch live on NBC, NBC.com or the NBC app.