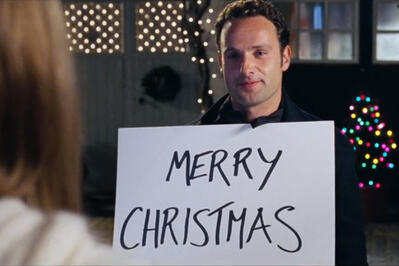 There are many movies that become holiday favorites and it’s totally understandable in the case of Love Actually because it has something for everyone: Liam Neeson playing a newly widowed dad who is focusing on his young son, Hugh Grant as an adorably charming U.K. Prime Minister, Colin Firth as an unlucky-in-love author, Emma Thompson as an under-appreciated wife and mom, and the late great Alan Rickman as her stodgy husband.

There’s also a pre-Walking Dead Andrew Lincoln as a man wallowing in unrequited love for his best friend’s wife, played by Keira Knightley. And don’t forget the always-wonderful Laura Linney as a woman crushing on her smoking hot co-worker played by Rodrigo Santoro (pre-Westworld.) Oh – did we mention the adorable moppet who is trying to befriend a female schoolmate he’s worshipping from afar? Fun fact: that moppet is played by Thomas Brodie-Sangster, who is now all grown up and co-starring in the hit Netflix series The Queen’s Gambit.

There’s also a soundtrack that will keep you humming along with the songs and infect you with some holiday spirit, which, let’s face it, is the only kind of infection we want right now.

There are only two chances to watch this modern classic on linear cable. Freeform has added the movie to its 25 Days of Christmas lineup. You can watch on Monday, Dec. 7 at 3:30 p.m. ET/PT or Tuesday, Dec. 8 at 10:30 a.m. ET/PT. Otherwise, your options for viewing start to get limited. At the moment, Love Actually is available to rent on AppleTV, Amazon Prime Video, YouTube, and Vudu. Check back later in December when more listings are available.