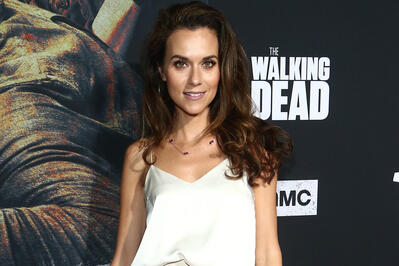 The Walking Dead has cast Hilarie Burton as Negan’s (Jeffrey Dean Morgan) wife in Season 10, TV Guide has confirmed. The actress will appear in the extra episodes ordered for the season, which are currently in production. Burton and Morgan have been married since 2019, and the couple have already begun filming an episode together in Georgia. Burton will be billed as a guest star for her work in the episodes, which are set to air in early 2021. ComicBook.com was first to report the news.

Burton will play Lucille, who is also Negan’s wife in Robert Kirkman’s Walking Dead comics. In the books, Negan and Lucille were married before the world ended, and Lucille was also going through a battle with cancer. Though Negan was having an affair, he called it off upon learning of her diagnosis. When Lucille ultimately died of cancer at the same time the virus began spreading, she reanimated as a zombie in her hospital bed. It’s unknown how closely the series will follow the comic book storyline though, or how many episodes Burton will appear in.

Production on the AMC zombie drama’s tenth season was disrupted by the COVID-19 pandemic. “The Tower,” which was initially supposed to be Season 10’s penultimate episode, was the last episode to air in the spring while post-production continued on the intended finale, “A Certain Doom,” which aired as a standalone special on Oct. 4.

It was announced that six new episodes will be added to the season during the show’s Comic-Con@Home panel in July. The extra episodes will technically be part of Season 10, but they will also function as a mini-season that will bridge Seasons 10 and 11, which is also the show’s final season. Season 11 is slated to premiere in late 2021.