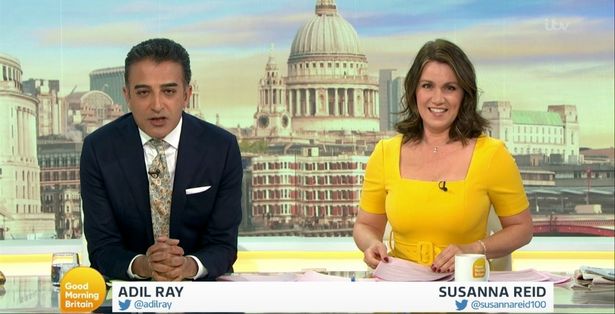 Good Morning Britain host Adil Ray appeared to make a bit of an awkward dig at Piers Morgan over his criticism of Meghan Markle’s new book.

Yesterday, it was announced that the Duchess of Sussex had written a children’s book called ‘The Bench’, which is about the relationship between fathers and sons.

But Piers wasn’t impressed, tweeting with crying laughing emojis as he questioned whether it was “a joke”.

He went on to lash out at Meghan in his newspaper column, asking: “How the hell can Meghan ‘I hate royalty but call me Duchess’ Markle preach about father-child relationships when she’s disowned her own Dad, and wrecked her husband’s relationship with his?”

The pair went on to speak about Prince Harry’s appearance at the vaccine concert, with Susanna saying that he is “fully embracing the Californian lifestyle”.

Adil remarked: “And this idea that members of the Royal Family who have commercial interest, this is nothing new. It’s what they’ve done all the time.”

Susanna agreed, remarking that Prince Charles had released a children’s book “back in the day”, as had Fergie.

“It suddenly becomes a bit contentious because it’s Meghan Markle, for some reason,” Adil said. “I can’t quite put my finger on why that might be.”