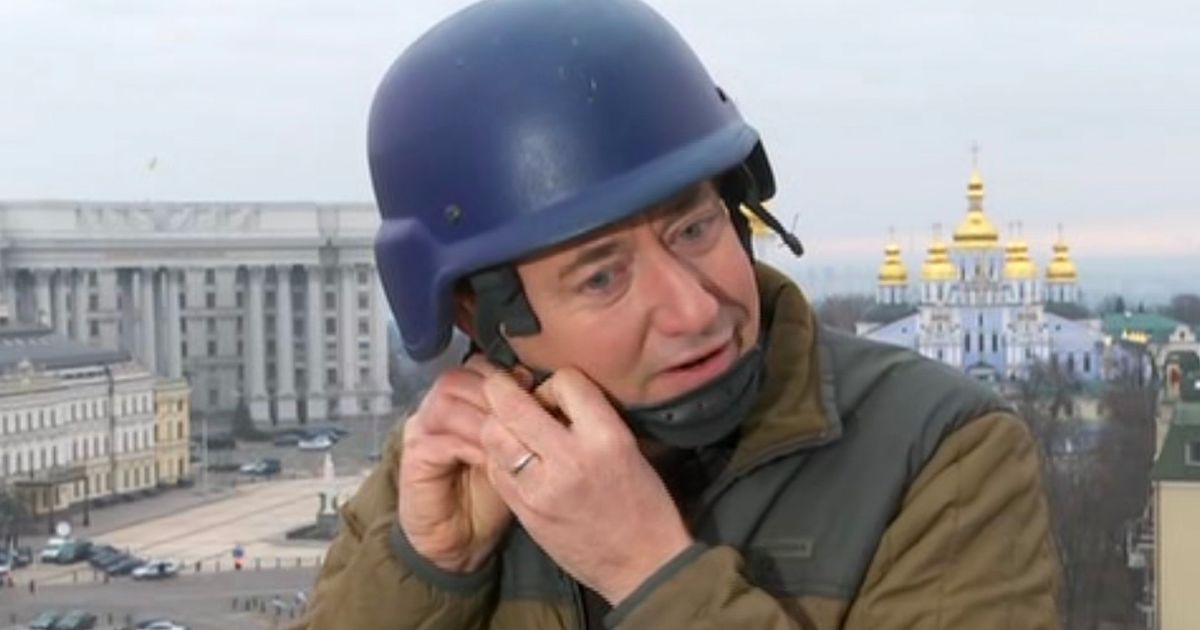 Good Morning Britain’s chief correspondent Richard Gaisford, who is currently residing in the Ukrainian capital as Russian troops invade the country, had been speaking to hosts Kate Garraway and Ben Shephard when he was forced to put his equipment on

GMB’s chief correspondent, who is currently residing in the Ukrainian capital as Russian troops invade the country, had been speaking to hosts Kate Garraway and Ben Shephard when he was forced to put his equipment on.

He appeared slightly shaken as the show cut away from his coverage as he took cover.

As Richard addressed the attacks overnight, a siren was heard in the background as he said: “As we talk, the air raid sirens are going off here in Kyiv – becoming something of a regular pattern here now. Just letting the population know that there is a threat where they can to take shelter and to obviously make an assessment for themselves and their own security.”

He looked over his shoulder as Kate asked: “Richard, when we hear those air raid sirens and I know our viewers are worried for you. Are you safe? Should you be running to take shelter? What precautions have you taken?”

“Yeah, we have taken a number of precautions but we have got our – in fact, it’s just being passed to me,” he replied as he put on a helmet. “We have got our personal protective equipment to put on. We also have our vests, should the need arise. It is a tricky time for many, obviously, in the city who don’t have this kind of equipment to hand.

“As I look out now, there are still people walking through the street, walking the dogs.”

Kate interjected, saying: “We’re going to let you get to safety, Richard, and we’ll get you back.”

“Sure,” he said before walking off screen.

He spoke about the attacks overnight
(

“You get yourself safe,” Kate insisted.

Ben added: “Ever the professional.”

Richard later returned to GMB as he continued to report, but viewers were incredibly worried about him as they took to Twitter to comment.

One wrote: “OMG get Richard home ffs not worth the shot #GMB.”

Richard put his equipment on while he was live on air
(

While another wrote: “#gmb we’re very concerned for you lol WELL WTF IS RICHARD DOING THERE IN THE FIRST PLACE with his stpd hat on and vest ..YOU DON’T need to be there.”

A third pleaded: “#GMB @GMB @benshephard Please can you let viewers know that @richardgaisford is safe and will be able to get back to UK.”